The UESPWiki – Your source for The Elder Scrolls since 1995
< Online: Places: The Rift / Inns
Jump to: navigation, search 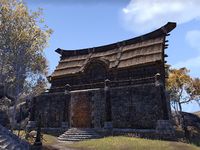 Riverside Inn is an inn in Nimalten. It is a two-story Nord-style building located at the central plaza. The ground floor of the inn houses a tavern on the right-hand side from the entrance. Aklief offers his services here. The tavern is furnished with several long tables with benches. Some are vacant, while others are occupied by the patrons. Several drinks and solvents can be found on the tables and around the brewer's bar along with few cold food dishes. On the left-hand side from the entrance is the innkeeper's stand and a small bedroom right behind it. The bedroom contains a bed, a nightstand and a trunk. A cooking fire can be found across the front door. Enjaadia, a bard, plays the lute beside the fireplace. The second floor has one more cooking fire and a big bedroom with four beds, folding screens, a nightstand, and a table with chairs. A bed in the far left corner is occupied by Agila. A door found on the second floor leads to a balcony, where Autrae Snow-Wing can be found, accompanied by Dimi. Two more cats reside in the inn.

An intermediate safebox sits in the nook behind the counter.

*Presence of this NPC here is quest-related.

This Online-related article is a stub. You can help by expanding it.
Retrieved from "https://en.uesp.net/w/index.php?title=Online:Riverside_Inn&oldid=2006928"
Categories:
Hidden categories: