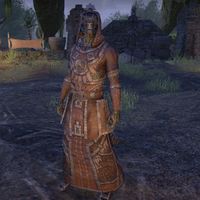 Naheesh Naxaltan is an Argonian elder of the Su-Zahleel tribe who can be found in the Ruins of Mazzatun. He was captured, alongside most of his tribe, by the hostile Xit-Xaht to be sacrificed to their Hist-Tree.

You can release him from his cage, whereupon he will encourage you to keep moving.

However, if you press the wrong switch he will be drenched in amber plasm, go mad, and attack you with his claws.

There is one Achievement associated with this NPC: