The peaceful Argonians of the Su-Zahleel tribe have been abducted and pressed into slavery by the Xit-Xaht—warrior fanatics that have been driven mad by their psychotic Hist. I must rescue the captives and put an end to the Xit-Xaht threat. 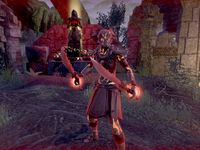 You will enter the Ruins of Mazzatun to find a lone Argonian seeking lurking at the entrance to the city. His name is Heem-Jas, and he is here to rescue the rest of his tribe. His tribesmen were abducted by the Xit-Xaht tribe while he was out fishing, and now they are being forced to work on the infernal city. The Hist at the center of the city, Tsono-Xuhil, is crazy, and bids its children to build a tall city of stone as opposed to making a village out of a more easily replaceable material, such as reeds or mud. Heem-Jas requests your aid in rescuing his tribe.

Make your way through the ruins and defeat the Xit-Xaht that stand in your way. When you kill their captors, the Argonians of the Su-Zahleel tribe will thank you, and Heem-Jas will direct them to the entrance. One of the captives informs you that an Argonian named Zatzu is holding more of their tribe captive, and she is one of the Xit-Xaht's strongest warriors. When you defeat her, Heem-Jas will arrive too late to help. Zatzu's captives will sound surprised that Heem-Jas is here to save them. He decides to help them to the entrance, and tells you to move on. He will catch up with you soon. Continue further into the city. When you come out of the stone maze, you will find a massive corral containing a Haj-Mota of impressive size. This is the Xit-Xaht Treeminder's pet, Mighty Chudan. You will need to kill her to move forward.

Once Chudan is dead, Heem-Jas will arrive late. The Tree-Minder Na-Kesh will soon appear up on the stone wall.

Heem-Jas: "I am here! You draw its attention while I ... oh. Well, good job. I guess."
Tree-Minder Na-Kesh: "Muck-dwellers! What have you done?"
Heem-Jas: "It is Na-Kesh! We have killed your pet. Release the rest of the Su-Zahleel tribe, or suffer the same fate! That was good, right?"
Tree-Minder Na-Kesh: "No. No, I think not. Xal-Nur prepares your elders for sacrifice even as we speak. Their blood will water the roots. As will yours."

Heem-Jas: "A sacrifice? There may still be time to save them. If the stories are true, Xal-Nur is slow and stupid ... but also strong as a graht oak. We must move quickly."

Press forward through the ruins. Eventually, you'll come across an open chamber within the city. Heem-Jas is waiting for you in the middle of the room.

Heem-Jas: "Ah, you made it. I have searched high and low but I cannot find any sign of Xal-Nur or the elders. It is also very, very quiet."
Heem-Jas: "That either means the Xit-Xaht have fled, or they have gathered in great numbers to kill us all. I hope it is the second. I am filled with sap and fury."
Xit-Xaht Warrior: "Now! Kill them!"

Heem-Jas is knocked down, and the Xit-Xaht ambush you. Defeat the city's protectors and Heem-Jas will find the strength to get up. He tells you to go on without him for a minute, as he has to gather his wits (and throw up) after being hit so hard. Exit the room through the vines to the north and cross the next two courtyards. After you free the group of Su-Zahleel being held in the second courtyard, the captives will inform you that Heem-Jas is attempting to face Xal-Nur on his own. Xal-Nur is located in the next area, which is an outside portion of the city enclosed in walls with ponds at the north and south ends of the stockade. Heem-Jas stands against Xal-Nur.

Xal-Nur breaths in his face, causing Heem-Jas to faint in terror. You need to kill Xal-Nur to save Heem-Jas and move forward. Once Xal-Nur is dead, Heem-Jas will thank you.

Heem-Jas: "I had him by the short spines. I know it did not look like it, but feigning panic is a excellent way to set an opponent off guard. Anyway...thank you.
Keep moving. We are near to finding the Tree-Minder and the elders, I know it."

He's not wrong. The elders are in the Sacrifice Chamber, which is behind Xal-Nur's corpse. One of the elders,Naheesh Dakeeto, is being harried by a Xit-Xaht warrior. Kill her captors and Heem-Jas will enter the room.

Enter the large chamber with the calendar as Heem-Jas helps Naheesh Dakeeto up. The Tree-Minder appears on a stone bridge above the cages lining the walls, and she is not pleased.

Tree-Minder Na-Kesh: "Indolent! Worthless! The Xit-Xaht do not suffer weakness. Drench the elders. Kill the invaders!"

As you enter the room, one of the elders notices you, and pleads for your aid.

Naheesh Veesum: "Who's there? She means to twist us into monsters! Please, you must set us free!"

You must begin by activating the calendar on the floor. One symbol will begin to glow, indicating that the button on a cage control stone with the corresponding symbol must be pressed to release an elder. If you the wrong button is pressed, the elder in the cage you messed up on will be drenched in sap and driven mad. The elder will then be released from their cage and attack you with the rest of the Xit-Xaht. Your goal is to avoid this.

The order of the symbols on the calendar that must be followed is always the same. The order is Shaja-Nushmeeko (Dancing Lizard), Hist-Deek (Little Tree), Hist-Tsoko (Biggest Tree), Thtithil (Ladybug), Xulomaht (Pencil), Xeech (Leaf Boat). The buttons these symbols are set on are randomized. For example, Dancing Lizard could be set on Naheesh Veesum by the entrance or Naheesh Naxaltan near the exit. Once a button is pressed, many Xit-Xaht warriors will arrive from openings in the walls covered in vines. It is ideal to wait until every Xit-Xaht tribe member is dead before pressing another button. Once all six elders are free, you must continue to the Mad Hist's Summit, where Tree-Minder Na-Kesh is praying to her Hist. 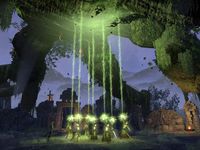 The Su-Zahleel elders put the psychotic Hist to rest

Defeat the Tree-Minder and speak with Heem-Jas for your reward. The Su-Zahleel elders will arrive at the summit after the quest is complete.

The elders perform a ritual, putting the Hist to sleep.

Naheesh Dakeeto: "Quiet now. Good. With rest and clean water it may yet remember what it means to be a Hist. Thank you, friends."
Heem-Jas: "Yes! Victory for Heem-Jas! Victory for the Su-Zahl—"
Heem-Jas: "Sorry. The cheering can wait ... I guess."