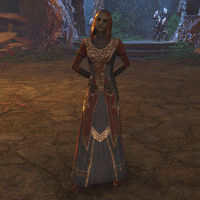 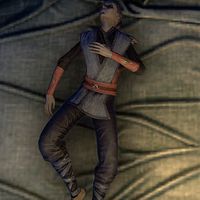 Mistress Dratha is a Telvanni magister who rules over Vos from the nearby tower of Tel Mora. According to Gray-Skies, Dratha is one of the oldest and most powerful Telvanni councilors. Although powerful, she is also known to be reclusive. When you travel to Vos, you will find that Mistress Dratha has fallen ill under mysterious circumstances, leading to a crisis of leadership. After you uncover what was apparently a Hlaalu plot, and help her get better, she asks for help to become immortal.

The opinions about Mistress Dratha's ruling abilities are mixed: whereas she might appear cold and calculating to some, she also claims to respect her people's freedom and intervenes only when necessary.

When you visit Tel Mora, you will see Mistress Dratha on the sickbed, whereas the local herbalist and healer Menwendel is checking up on her, and talking to Mistress Dratha's Mouth, Llayne Sadri. Dratha herself will not be contactable at this point, saying the following: 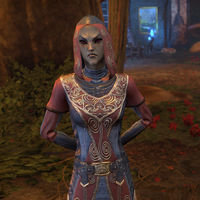 A close up of visibly younger Mistress Dratha, after having made the pact with Daedra and gaining immortality

"Let me get a better look at you. Hmm. Your eyes are wrong, but your palms seem clean enough ....
I have a task for you. If you succeed, you'll earn the favor of a Telvanni councilor and a treasure from my vault. Is this agreeable?"
Maybe. What is it you want?
"In all my long years, the thought of death has rarely troubled me. But thanks to Savarak, I've gained new perspective. My illness took me to the brink of the void. The tip of the scythe.
Someday I may welcome death, but for now, steps must be taken."
What kind of steps?
"I find that people lead much happier lives when they don't trouble themselves with details.
Now, Vvardenfell is littered with Daedric shrines. Seven of these shrines contain powerful magicked stones. You must find these stones and bring them to me."
All right. I'll keep an eye out for these stones.
"The task I've set before you won't be easy. These shrines lie near and far. Some are little more than piles of brickwork, while others extend deep underground.
Even so, I'm confident you'll find what I'm looking for—the Stones of Cold Fire."
What exactly are these Stones of Cold Fire?
"So you're a scholar as well? I certainly wouldn't have predicted that.
Before the Tribunal showed up, we Dunmer worshiped the Daedra. They raised no small amount of havoc, but they also left us valuable gifts. Gifts like the stones."

What do the stones do?
"Nothing, until they rest side by side. If a mage manages to wake all seven, well ... let's just say their powers of persuasion are put to the test."

Aren't you worried about using Daedra relics?
"Of course not. Why should I be?
The powers of Oblivion hold no great mysteries for mages like me, and House Telvanni has no time for folklore and childish superstitions. What's the point of power left unclaimed?"

Do you have any plans for Vos now that Savarak is dead?
"Plans? No, of course not. I'll leave them to their business just as I always have."

But the people seemed so anxious for you to return.
"I'm sure they did. You'd like an explanation, wouldn't you? Fine.
You want to earn people's love? Here's the secret—just leave them alone. Treat them like adults, even when they act like children. The rest takes care of itself."

So that's it? You just leave them alone?
"Yes. Believe me, it's a rare and wonderful thing to live under the protection of a disinterested ruler. Self-determination. It'll be all the rage in a millennium or two, I guarantee it.
Now, are we finished? I need those stones."

When you have gathered all of the seven stones and return to Dratha, she inquires about your mission.

"Hmm. Looks like the Daedra certainly put you through your paces. How did you fare? Do you have the stones I asked for?"
Yes. I have the stones right here.
"Good. My dear Llayne chooses her allies well.
I'll prepare the stones, but one other task remains. You might be equal to the challenge …."

What more do you need?
"I must call on a particularly shrewd Dremora named Xykenaz. He refuses all summons, so we'll have to use … less pleasant means of negotiation.
I'll send you to his home plane. Go there, weaken him, and I'll draw you both back to Nirn."

Wait. You want me to bring a Dremora here? Why would I do that?
"Surely an adventurer of your stature isn't frightened of a single Dremora? Summoning Daedra is no more dangerous than taming bears—and even the dull-witted Orcs can do that.
It's quite safe. I'll send it away as soon as our business is concluded."

I'll think about it.
"I hope you'll keep those deliberations brief. I'm opening the path now. When you stand ready to face Xykenaz, simply enter the portal.
And don't worry, I'll make sure you have a way back on the other side. I always keep my promises."

She then prepares to start the ritual for opening the portal to Xykenaz' realm.

Mistress Dratha: "The ritual allows me to speak to you through the veil, so keep your mind open when you reach the other side … or as open as you can manage."
Mistress Dratha: "Mor molag, Kana shanta. Delle nor gandra. Abagaianye!"
Mistress Dratha: "It's done. Trounce that unruly Dremora and the reward I promised is yours."

When you enter the portal, you hear Dratha comment on your arrival.

Mistress Dratha: "I hear the rattling of chains … you've arrived. Strike down Xykenaz then hurry back to the portal!"

Back in Tel Mora, Dratha will tell you, "Well done. Hm. I envy your youth. I might have found some way to rob or deceive a weakened benefactor, but not you. It's just on to the next adventure. Vibrance and integrity. What a curious combination."

A dark Daedric pact? That's what I helped you achieve?
"Spare me your incredulity, Outlander. Not a word I told you was a lie. I simply didn't care to divulge all that I could have.
Truly, it's baffling you didn't suspect this from the start. Why else summon a Daedra, if not to make a bargain?"

And what bargain do you plan to make?
"I truly fail to see how it is any of your concern, but I suppose you have done me a favor. To put it simply, I need more time. I don't do this out of vanity. An ancient threat looms at the edge of my sight. I must remain until it is dealt with."

I should have been told what I was helping you to do.
"That would be your opinion, wouldn't it? My path is clear. A Daedric pact may seem a grim choice, but I'm prepared for the consequences.
Now, you adventurers love trinkets and gold, yes? I trust this will suffice. Farewell." 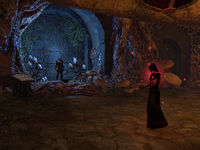 With these words, she gives you Dark Staff of the War Maiden and the quest is complete. Dratha then begins to summon the weakened Dremora.

Mistress Dratha: "I shall begin the summoning immediately. Llayne be ready."
Mistress Dratha: "Xykenaz! Duke of black covenants! Appear! By the seven stones of your dark Prince, you will parley with me!"
Xykenaz: "Hmm … Dratha. Come to treat with another of Bal's servants? You will pay for this."
Mistress Dratha: "Silence, Daedra! Bend and heed my words! I demand immortality. Name your price."
Xykenaz: "Yes, price. There is no gift without cost, witch. I will grant your wish, but know this—you will live in endless fear, for on a day of my Master's choosing, I will come in the guise of a mortal man to claim your withered soul for Coldharbour."
Xykenaz: "There you will face an eternity of anguish and drown forever in an icy sea of shame. Tell me, scion of Azura, do you accept my terms?"
Mistress Dratha: "I accept."
Xykenaz: "The covenant is made. Be seeing you, magister."

You can speak to Mistress Dratha once more after the pact is made:

"Your actions have ensured the safety and prosperity of Tel Mora for years to come. Quite an accomplishment for a wiry youth.
Now if you'll excuse me, I have preparations to make. Many, many preparations."
Are you sure about this deal with Xykenaz?

"You've served me well, but you overstep. This pact is deeply personal, and I will not be second guessed. Nothing is more precious than time—the more precious the gift, the higher the price."
Is time really worth the price you paid?

"Ha. Ask me again in a few hundred years.
Risk is the price of any worthwhile endeavor. A vigorous adventurer like you should know that already. The trick is managing that risk—and no one navigates danger better than a Telvanni magister."

Next time you visit her, you can ask similar albeit slightly differently worded questions:

"Here to remind me of my mistake? I have no regrets for my decision, Outlander. Perhaps in a hundred years I will, but not today."
Are you not frightened of what is to come?

"What a presumptuous question. I don't believe I shall answer it.
I can tell you, however, that I hold no regrets. My path is clear and my eyes are open. You may not live to thank me for this choice, but perhaps your descendants will."
Do you know when you'll be taken to Coldharbour?

"Is it better to know? To count down the days with dread? Or better to be ignorant, to worry and wonder if today is the day, or perhaps tomorrow?
Give me a decade or so to decide how I feel about that."
You seem pretty calm about this.

"A magister must learn to keep her worries hidden and her face calm.
Xykenaz said he would come in the guise of a man... a Nord perhaps? A Breton? Or will it be a Mer? Perhaps I can speak to Llayne about setting up patrols for strangers in town."