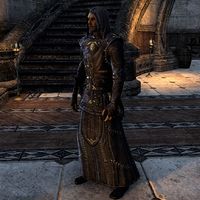 Mercano is an Altmer and Thalmor advisor of healing arts. He has served the Thalmor for almost twenty years. He can be found in the Thalmor Headquarters in Woodhearth.

When he was younger, his wife died from a consuming plague. Mercano wrote a journal detailing his attempts to save her and raise her from the dead. The Veiled Heritance later used these notes, without his knowledge or consent, to raise liches.

"I've served the Thalmor for almost twenty years now, as an advisor in the matter of healing arts."

I found your notes. The Veiled Heritance was using them to create liches.
"The Veiled Heritance were using my notes? No. What have I done?
I was young and foolish when I wrote these notes. I just wanted to save my wife from a consuming plague. I should've destroyed them then. I will destroy them now. Thank you."

"Thank you for returning my journal to me. It pains me to think that it ended up in the wrong hands."