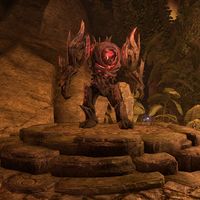 As a boss type enemy, the Infernal Guardian is immune to all crowd control effects.

Double Slam
A basic melee attack that does moderate physical damage. If taunted the boss will be forced to use this attack on the tank only.

Ground Slam
The boss slams the ground, dealing moderate physical damage around itself as indicated by a red circle. This also staggers all enemies within.

Fiery Explosion
The boss spews fire in front of itself as indicated by red circles. This does high flame damage and should be avoided by standing behind the boss.

Consuming Fire
While casting Fiery Explosion, the boss will deal minor flame damage around itself.

Tunneling Roots
The boss stomps sending roots to hit a player far away from it. This deals moderate physical damage and staggers the target.

There is one Achievement associated with this enemy: