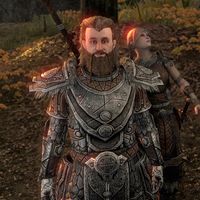 Dagrund the Bulky greeting you at the entrance to the realm 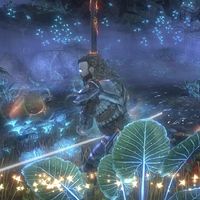 Dagrund the Bulky is a Nord who can be found in the March of Sacrifices. He is the leader of one of the groups competing in Hircine's Great Hunt and claims to be descended from werebears. Later on in the Whispwood, Tarcyr will kill him and his fellow hunters, raising him as an undead thrall.

As a boss type enemy, Dagrund the Bulky is immune to all forms of crowd control effects. Throughout the fight the boss will swap between fire, frost and shock based attacks in that order.

Quick Strike
A basic melee attack that deals minor physical damage.
Ravaging Blow
A charged heavy melee attack that deals very high physical damage. This must be blocked by the tank or dodged if you are not.
Decimate
The boss jumps in the air and lands dealing moderate physical damage as indicated by a red circle.
Upheaval
After landing, the boss releases tremors that will chase all group members dealing moderate damage as indicated by red circles. Roll dodge or block the tremors to reduce the damage done.
Summon Bearfang Hunter
When changing elements, the boss will summon two Bearfang Hunters to attack the group. Kill them first to simplify the fight.

Dangrund can be first encountered at the entrance to the Bloodscent Pass along with the other competitors.

"Staking your claim to Lord Hircine's boon, huh? Good luck! You're going to need it with competition like us."
What makes your group so special?
"The blood of werebears runs through our veins.
You know, the cozies out there are always quick to associate Lord Hircine with werewolves. And they're fine and all, I suppose. But nothing beats a werebear's might!"
And what favor do you want to ask Hircine?
"Not sure yet. Winning the Great Hunt is sure to earn us eternal glory. Any prize we earn afterward is just icing on the sweetroll."

Dangrund can be encountered again in the Wispwood, where his group has been tracking Tarcyr and the area has become suspiciously foggy.

Dagrund the Bulky: "Troll's blood, it has to be here somewhere! Keep an eye out!"

Bearfang Hunter: "Where did he go?"

<His corpse drops from the sky. and the rest of the hunters are teleported into the air as well.>

<The hunters fall from a fatal height and die upon impact with the ground.>

Upon a Group Wipe:

This Elder Scrolls Online-related article is a stub. You can help by expanding it.
Retrieved from "https://en.uesp.net/w/index.php?title=Online:Dagrund_the_Bulky&oldid=2351446"
Categories:
Hidden categories: