Once this young Netch calf imprints on a master, it will follow him or her anywhere, floating along and tootling happily. 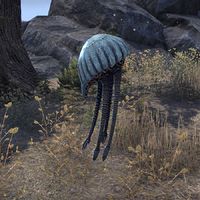 , and in the Wild Hunt Crown Crates as an Epic-level reward. Its default name is "Bulgy".

Most Echalettes are docile and fawn-like, but not the Badger Ruff breed, which are strangely fierce and irritable. They're so ornery they've been known to chase away inquisitive Sabre Cats. 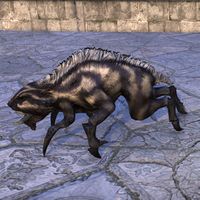 Badger Ruff Echalette was available from the Crown Store during the end of the month of March 2019, for 00900900

. It is also available in New Moon Crown Crates as a Superior-level reward. Its default name is "Feisty".

Who says a giant, aggressive, blood-sucking insect can't make a loveable pet? Not the Dark Elves of Bal Foyen, who breed them as trackers, watch-hounds, and netch-deflators. 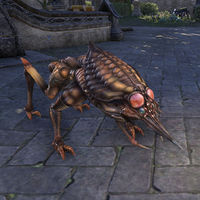 , and can also be found in Dwarven Crown Crates as a Superior-level reward. Its default name is "Skeeter".

Though unwilling to fight, this Daedric minion will follow you loyally—for now. 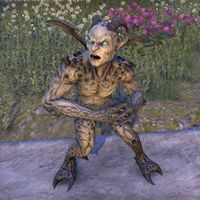 Banekin pets are available from the Crown Store for 700

, and in the Wild Hunt Crown Crates as a Superior-level reward. Its default name is "Ornery".

According to the calculations of the sages of the Cult of the Ancestor Moth, the bantam guar is the cutest creature in all Tamriel. 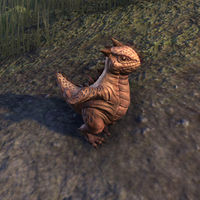 , but can now only be obtained as part of the Adventurer Pack. Its default name is "Squee", changed from "Squeee" in Patch 2.0.5 due to contradicting the existing naming conventions of player characters.

Though the adult Bear-Lizards can be quite intimidating, even fearsome, the roly-poly lizard cubs are disarmingly cute. (For reptiles, that is.)

The Bear-Lizard Cub is an upcoming mount. Its default name is "Scaly-Boo".

This gentle giant embodies kindness and loyalty, and her loving spirit will run alongside you forever.

Belle is an upcoming pet. Her default name is "Belle".

The Big-Eared Ginger, a favorite shipboard pet, is just about the most playful kitten in Summerset. Its over-sized sound catchers enable it to hear every tiny motion within range before it pounces upon it. 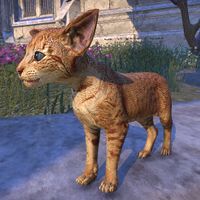 The Big-Eared Ginger Kitten is a pet acquired by collecting seven runebox fragments in Karnwasten, Summerset. Its default name is "Batkitty".

The Ginger Mouser is a favorite barn cat of grain farmers all across central Tamriel, not just because it keeps the storage bins rodent-free, but also for its affectionate personality and goofy good looks.

Thetys Ramarys of Balmora says, "I love our Bitter Coast Striders, but feel bad that they can't fly very well. So I'm selectively breeding them into a strain that, one day, will dominate the Vvardenfell skies, pursuing its prey for great distances! 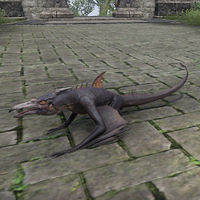 . Its default name is "Shrieky".

The Black Bear Cub is both playful and affectionate, and is so adorable it's quickly forgiven for whatever trouble it gets into. 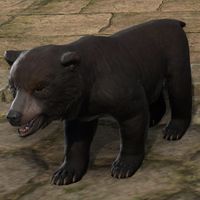 , and later appeared in the Reaper's Harvest Crown Crates as a Legendary-level reward. Its default name is "Roly-Poly". 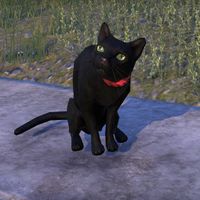 Black cat pets were made available as part of a regional promotion on amazon.co.jp for those who purchased the Japanese digital version of the game, and were later made available in the Crown Store for a limited time for 00700700

. It is now available as a Superior-level reward in Frost Atronach Crates. Its default name is "Salem".

This variant of the Bear-Dog is a favorite of the Markarth Watch - and of the thieves who attempt to evade them. The Watch uses them to sniff out trouble, while the outlaws employ them to keep an eye out for the Watch! 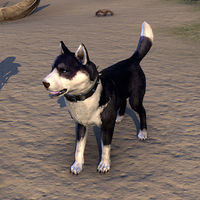 The Black Mask Bear-Dog is available as a Legendary-level reward in the Storm Atronach Crown Crate. Its default name is "Nightbiter".

Bull Mastiffs from Morthal in Skyrim are fearless and tireless hunters inured to the hardships of the frozen marshes. The black ones are particularly popular with mages and alchemists.

The Black Morthal Mastiff is a Superior-level reward available from Psijic Vault Crown Crates. Its default name is "Blaggi".

"Rajhin the Purring Liar had so many shadows that some of them took on lives of their own, becoming Black Senche-Panthers who stalk freely through Elsweyr -- just like this kitten that plays with my tail. --Clan-Mother Ahnissi" 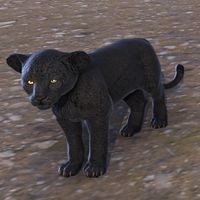 The Black Senche-Panther Kitten is a pet available in the Wild Hunt Crown Crates as a Legendary-level reward. Its default name is "Keirgo".

This busy little buddy is sometimes mistaken for an imgakin monkey.

The Blackwood Monkey is an upcoming pet that has yet to become available, though has been in the game files ever since at least Patch 2.1.0. Its default name is "Flinger".

For the Dark Elves, the Shroom Shalk is a companion animal that brings calm and serenity to the Dunmeri home. There's just something so soothing about the way the blue fungal sprouts on its back gently wave and puff out spores as the beast putters about. 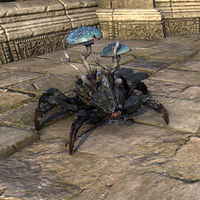 The Blue-Cap Shroom Shalk was available in the Dwarven Crown Crates as an Epic-level reward. Its default name is "Sporebug".

"A 'Baby Dragon,' you say? No such thing. What you have there is a clever Illusion Imp that's found a way to get free handouts and a warm place to sleep. Young folk these days: so gullible." —Divayth Fyr 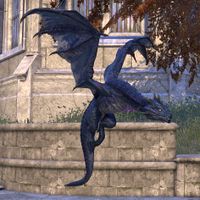 The Blue Dragon Imp was distributed to those that pre-purchased any version of the Elsweyr chapter, and was made available at its launch. The pet flies around while its owner is idle. Its default name is "Dwiindovah".

The comical Blue Oasis Dragon Frog is native to Hew's Bane, and before they were bred as pets could be found only on that Hammerfell peninsula. These little bug-eaters are popular mascots at open-air taverns. 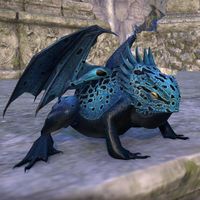 , and in the Wild Hunt Crown Crates as a Legendary-level reward. Its default name is "Topaz".

The rare and colorful Shock Nixad looks rather like a tiny, winged Storm Atronach, though without the whirling electric rocks. They make loyal companions—though they may also make your hair stand on end! 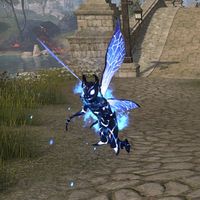 When the gray wolves of Rivenspire howl across the dismal moors of Boralis, it sends a chill down the spine and even the bravest look back over their shoulders—but by Kynareth, their pups sure are cute! And adorably playful into the bargain. 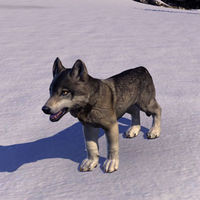 The Boralis Gray Wolf Pup is available as an Epic-level reward in Online:Frost Atronach Crates. Its default name is "Darla".

"The Brassilisk is created from interconnected brass squares, its exposed copper wiring allowing for its snakelike movement. Popular as a pet, you'll often see them following the quick footsteps of young scholars." —Endilaril, Clockwork City Naturalist

The Brassilisk is an upcoming pet that has yet to be available. Its default name is "Coppertongue".

The Bravil Retriever loves the water, and is a favorite hunter's companion from Anvil to Gideon. 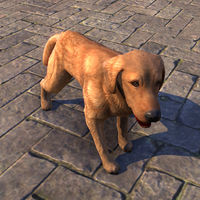 , and in the Wild Hunt Crown Crates as a Superior-level reward. Its default name is "Dogdroth".

Originally bred to find and kill rats on the docks of the Iliac Bay, the Breton Terrier has found a place in the hearts and minds of many Tamrielics due to its joyful and wriggly behavior. 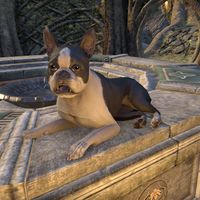 The legend among the underworld explorers of the Undaunted is that these little incendiary spires are responsible for lighting all the candles, torches, and lanterns found burning underground, flying ahead of adventurers to ignite them in the dark. 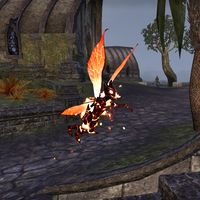 . Its default name is "Torchy".

This cross between a domestic pig and a Skyrim boar is as loyal as it is adorable. 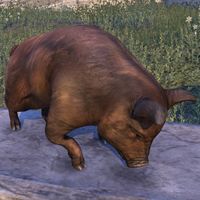 Bristlegut Piglets were given out at conventions and as part of official competitions and giveaways in 2014. It was also included as part of the Humble Monthly Promotion in 2017. Its default name is "Muddles".

Originally from Solstheim, this tempestuous boar exists in two modes: hungry and hungrier! Given that it can carry gear, though, providing it with its favorite fungi is a small matter. 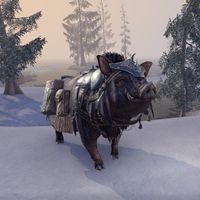 The Bristleneck War Boar is available in the Crown Store for 012001,200

. When purchased, it increases the inventory capacity of each of your characters by 5, bringing the maximum amount of inventory slots you can have up to 205. This increase is passive and there is no requirement to make the boar your active pet. This is the first time a vanity pet has provided tangible gameplay benefits. Its default name is "Grumblerush".

This pet was originally datamined with the default name of "Gruntly", and had the following description: "It may be hard to believe, but the ancient Nords were even more warlike than modern Nords, and had a way of weaponizing everything that came to hand, even their livestock. This was the origin of that most obstreperous of porkers, the Bristleneck War Boar."

"The Butterscotch Dragon Frog presumably got its name from the Argonian practice of naming things after flavors, whether those things taste like that or not. This one has no intention of finding out whether it does." -Ma'iq the Liar

The Butterscotch Dragon Frog is available from the Xanmeer Crown Crates as an Epic-level reward. Its default name is "Bug-Biter".