This article is about the knight. For the mage, see Alana Relin (mage). 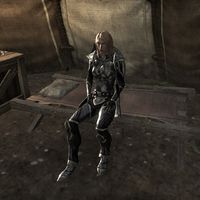 Alana Relin was a Breton knight who fought against the forces of Faolchu the Changeling at the Battle of Glenumbra Moors. 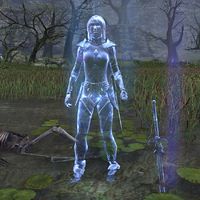 The spirit of Alana Relin

Collect the Ancient Blades from each of them and return to Sarvith Lunlin at the Mages Guild camp. He and Bhagrun Gro-Dunk cast a spell on one of the swords when a Alana's spirit appears:

Alana Relin: "Listen to me! You must listen!"

She just as quickly vanishes.

As you examine the time ripples, she'll reappear:

Go to the tomb and you'll be able to speak to her:

"I remember this place. It all started here, on the day of the final battle.
We gave up everything to kill Faolchu. I'll be damned if I just let him come back to life and curse the world again."
Is that why you've returned?
"I'm here because the one I loved gave up everything that day to save his people.
You seek answers. I'm here to help you find them and hopefully avoid the tragedy that occured [sic] on that long ago day."

A Step Back in Time[edit]

"This armor is your key to the past. It belonged to my beloved and was buried in this place of honor.
It was my beloved's hand that cut Faolchu down."
What happens if I put on the armor?
"You'll relive the last moments of the battle. You'll take the place of my beloved. Experience the fall of Faolchu as it happened.
But be careful. You can affect events. Whatever you do may have untold consequences."
What kind of consequences?
"You won't just see a vision of the past, you'll live through it. What you do may change the destiny of those around you.
This is a terrible burden to carry, but it's the only way to get the information you seek. When you're ready, put on the armor."
I'll put on the armor.
"Ah, this armor brings back such memories.
Now get dressed. There's much to see and the connection to the past won't last long."
How do I return to the present?

"When Faolchu dies the armor will eject you from the past. You'll return, unharmed, to the here and now.
Yes. That's what will happen. I'm sure of it."

Can you tell me anything about where I'm going?

"It was a violent, bloody time. The Alessians were on a holy crusade to purge every Mer who occupied this land and called it home. They destroyed anything with even the smallest connection to magic."
But you were Breton, not Mer. Why fight against them?
"Would you stand by while those who didn't deserve to die were judged by religious zealots? Unless I strongly misjudged you, I think not.
We did what was right. And we would do it again. Which is why I'm here."
Tell me about your beloved.
"Wise, kind, courageous. Everything one could want from a constant companion.
But you'll see soon enough. I only hope that what you learn will help you in the present situation."

Don the armor and as you scream in pain, Alana will greet you:

Alana Relin: "There you are, my love. I was starting to worry about you."

You can talk to her before leaving, prompting her to ask:

"Why do you linger, my love? Commander Parmion rallies the troops for the final assault. You're his best officer and our noblest knight. You should be at his side for this moment."
I'm not sure what's going on.
"Did that blow to your head rattle your senses?
We're on the verge of turning the tide and we'll launch the strike against Faolchu's headquarters soon. Come, my love. We have work to do."
Remind me. What work is that?
"The Alessian orders, of course. They're crucial. We captured the messenger but not before he handed the orders off. We need to search enemy soldiers until we can retrieve them. We can't have the Alessians surprise us when we're this close to victory."

Before you leave, she'll order:

Alana Relin: "Do what you have to do and find those orders. Then find me at camp. We need to talk."

Speak to her before she leaves and she'll remind you of your duty: "The orders must be on one of the Alessian soldiers. Find them and meet me back at the camp."

After speaking with Parmion, you can find Alana sitting in a nearby tent. Speak to her, and she'll say:

"I know you wanted to go after Faolchu, but you'll see plenty of action defending the camp."
Are you sure you don't want me to go with you?
"I appreciate your concern, my love, but orders are orders. If either of us fails, this entire battle could be lost.
But have no fear. I'll make sure we never have to worry about Faolchu again."
How will you stop him?
"How? He's just a man, my love. I'll stick my sword in him a few times until he drops. Then I'll stab him again!
I'll be back in no time, carrying his head high as a trophy. I can't think of a better gift to celebrate our new family."
Our family?
"Later, my love. I'll tell you all about it after the battle. No need to distract you right now. It's nothing but good news, though, I promise.
I love you, you know. Now go."

Speak to her again and she'll add:

"Whatever happens, beloved, I ….
No, enough. Only the fight matters now."

If you chose to rescue Alana, you'll find her in the tower at the western end of the camp:

"What a disaster! I should have suspected a trap. And now Commander Parmion's dead.
What about Faolchu?"
I sent the remaining troops to kill him.
"You sent them to be slaughtered! I was wrong. Faolchu isn't an ordinary man. I drove my sword right into his heart and he didn't even feel it. Our weapons won't be able to stop him.
The soldiers won't stand a chance."
There must be some way to kill Faolchu.
"Let me think … wait a moment! The way he shrank back from our torches ….
Fire! That's the answer. It has to be! Tell the others. Help them. If Faolchu isn't killed, we all lose."
What about you?
"Someone needs to get this information back to our camp. If Faolchu eludes you, our remaining forces need to know how to kill him.
Go, my love. Go make history."

She'll then run off to the Direnni camp.