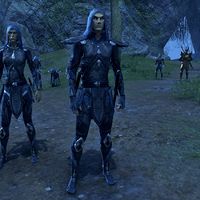 Commander Parmion was an Altmer who commanded Direnni troops against the Alessian Empire during the Battle of Glenumbra Moors.

As you approach Commander Parmion in the center of the Direnni camp, he will remark:

Commander Parmion: "About time you returned."

Once spoken to, he'll add:

"There you are, my knight. Did you recover the orders?"
Here are the Alessian orders.
"Excellent. You're a credit to the Direnni Guard.
Now we can prepare a proper counterattack to the upcoming Alessian assault. They won't know what hit them! You should show these to the Ayleid King. He just arrived and is eager to get involved."
The Ayleid King?
"Yes, he surprised us all. We weren't expecting the last king of a dying people to show up on the field of battle. But he's a brilliant tactician and his advice can only help.
Meanwhile, we'll send Alana's unit to put an end to Faolchu."
Alana? I need to be the one to strike down Faolchu.
"What? Nonsense! Alana can handle it. If these orders are any indication, I need you to lead our defenses.
But speak to Alana before she goes, if you like. Just make it quick. And don't forget to talk to the King."

After speaking to the King and Alana, you'll have to listen to Parmion's speech:

If you speak to him before entering battle, he'll only say:

At the end of the quest, Scout Hanil will inform you that Parmion decided to join their assault on Faolchu's Lair, but was killed, as there were more troops there than they had anticipated.