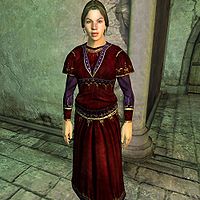 Rona Benanius is a Nord maid who serves at Battlehorn Castle. She will provide you with any wine the cellar has in stock, plus cheese, grapes, strawberries, mutton, Shepherd's Pie, venison, and sweetrolls. She will also follow you around if you ask her to.

Rona wears a red velvet blouse, red velvet garment, and a pair of blue suede shoes. She also carries an apple, a bread loaf, and a small amount of gold.

Rona sleeps between midnight and 6am in the small bedroom close to the kitchen. When she wakes up, she eats breakfast with Plautis Rusonius in his room for two hours. Her evening meal is also taken in Plautis' bedroom, between 10pm and midnight. For the rest of the day she will walk around the castle's master bedroom. She will follow you if asked, returning to her normal schedule once released.