The UESPWiki – Your source for The Elder Scrolls since 1995
< Oblivion: Creatures: Animals
Jump to: navigation, search 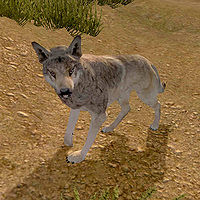 Hjalti wandering around the outskirts of the castle

Hjalti is the pet wolfdog of Niels, Battlehorn Castle's blacksmith. It is a crossbreed between a dog and a wolf, with features of both. Until the marauders are defeated, Hjalti will stay in the blacksmith's house. Afterwards, Hjalti spends his time either sticking by Niels, wandering in his house, or wandering around between the gate to the outside world and the gate to the Castle. Hjalti will appear without any upgrades needed from Nilphas Omellian.

Obviously, the life of a blacksmith's dog has taken its toll on Hjalti. Niels has managed to make Hjalti stronger than a normal wolf, but living in the heat of Battlehorn Castle has eliminated his resistance to frost, a bonus most other wolves have. Like dogs, he carries the disease Witbane. He also fights like a dog rather than a wolf.