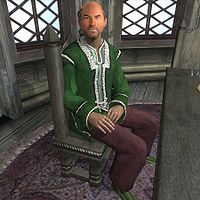 Gaston Tussaud, a Breton pirate, is the captain of the Marie Elena, a vessel docked in the Imperial City's Waterfront District. It seems that Gaston has made some enemies, and an appeal has been made to the Dark Brotherhood, which passes the request along to you.

Before the related quest, he does not exist in the game, but once Vicente Valtieri hands over the contract, he will show up in the captain's cabin of the Marie Elena, living the life of a true pirate captain. Every day between 6am and 2pm, he can be found seated at the dinner table doing absolutely nothing but relaxing and taking confidence in the fact that First Mate Malvulis and the other pirates are guarding the ship. When he finally gets out of the chair, he will pace restlessly around the cabin until his dinner time at 8pm. He takes his time and eats until midnight, when he heads to bed and sleeps securely for six hours.

He wields a steel cutlass and wears a pair of burgundy linens, a green brocade doublet, and green velvet shoes. He carries around a copy of The Lusty Argonian Maid, a sizable amount of gold, and his key.

His cabin contains quite a bit of interesting items and loot. Besides a considerable amount of silverware and a few luxury ingredients, on the dinner table, you'll find a Nirnroot and, in a cupboard nearby, a bottle of Surilie Brothers Vintage 399 and of Tamika Vintage 415. Lying on a desk in the opposite side of the room is the rare book Fall of the Snow Prince as well as an equally rare note. The most interesting item is located near the bed and is called Captain Tussaud's Booty, a chest with a Very Hard lock containing jewelry and a huge amount of gold.

As you have to confront Tussaud, he will stop whatever it is he's doing and yell out: "What in blazes! You ain't one of me crew! Ye best start explainin' yerself, mate, if ye want to get off this ship alive!" If you choose to reply with "The Dread Father summons you" he will react: "Huh? What are you, some kind of preacher or somethin'? One of them crazies from the Church? I ain't got time for this...." If you choose to tell him that "justice is at hand, pirate", he will laugh at you: "Justice? Hahahahaha! I been avoidin' that all my life, mate! Let me show you how!" If you choose to ignore him, he will hiss at you: "Oh, so you want to get cute, do you? All right then, mate, we'll do this the hard way!" All three options will cause him to attack you, so be prepared.

Two of the pirates on the Marie Elena have a conversation about Tussaud that gives some background about him and his ship. Vicente Valtieri gives you a little more detail when you accept the quest to kill Tussaud: "As a pirate, Gaston Tussaud has certainly spilled his share of blood. Someone wants revenge, and they've hired us to extract it." and some instructions: "Board the ship and find its captain, Gaston Tussaud. He'll be in his cabin. Eliminate Tussaud in any manner you see fit." After the elimination, Imperial City citizens may be heard saying: "Have you heard? That big galleon down at the Waterfront? Someone killed the captain! Right there on the ship!" and "Hey, have you heard about that pirate captain, the one who was murdered in his ship?"