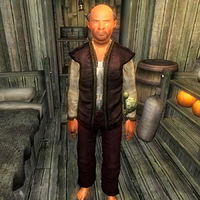 First Mate Filch, a Breton pirate, is the first mate of the Sea Tub Clarabella, a pirate ship docked in Anvil. He seems disgruntled at the moderate loot they've been getting lately, judging by the note he gave to the captain. He is hostile and will attack you on sight.

Ignoring the tales of a stereotypical adventurous pirate, he spends his entire life wandering around the lower decks of the Clarabella, waiting to jump an intruder.

He wears a brown shirt, burgundy linens and a brass ring. He is armed with a steel cutlass and carries the key to the Sea Tub Clarabella.