The UESPWiki – Your source for The Elder Scrolls since 1995
< Oblivion: Places: Ships
Jump to: navigation, search 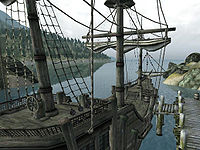 The Sea Tub Clarabella is a ship docked in Anvil Harbor that contains pirates.

It is docked south of The Fo'c's'le. It is also part of an illegal sheep smuggling ring which is run by Captain Baszone Patneim and First Mate Filch. Anvil residents seem to be oblivious to the smuggling activities on the ship, because the ship is never mentioned by any residents outside of the quest. With the Thieves Den official plug-in, Dahlia Rackham is also located on the ship.

This is a typical captain's cabin, consisting of three areas: the antechamber, the bedroom, and the dining room. The antechamber holds two crates and a cupboard in the northwest end that all contain clutter. A table in the north corner of the bedroom holds a copy of The Red Book of Riddles, a locked jewelry chest with a chance of enchanted jewelry, and a clutter sack. In the east corner sits a clutter barrel, a clutter sack, and Captain Patneim's chest. The captain's chest is locked with a very hard lock but can also be opened with Captain Patneim's key; it holds a copy of The Lusty Argonian Maid, 100 gold, two potions of water breathing and water walking, and random jewelry. In the west corner a cupboard holds food. The raised dining area in the northeast end of the level holds a table set with three bunches of grapes, two ears of corn, two potatoes, a cheese wedge, a sweetcake, and two bottles of mead. The sacks and chests on this level are all safe for long-term storage, but the rest of the containers are not. 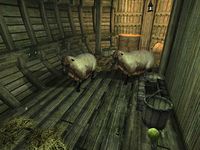 The entrance from the main level leads into a room with two beds, a barrel and two crates that hold clutter, and a chest that can hold armor and/or weapons as well as a pumpkin and a watermelon. A sheep wanders here, and a door on the northeast wall leads to a room that holds three more sheep, a grain sack, and two heads of lettuce. The next room to the southwest is a storage area that holds two barrels, a crate, and a sack that all hold clutter and two grain sacks. A trapdoor here leads to the lower deck. A door here leads to a final room that holds a bed and a table with a loaf of bread and a tomato. The armor/weapons chest and the sacks are the only non-respawning containers on this level. 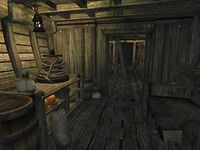 The first room in the lower deck holds a locked chest that can contain gold and jewelry as well as four grain sacks. The next room holds a bed, two clutter barrels, three clutter sacks, and two pumpkins. First Mate Filch can often be found here. The final room holds two clutter crates, two more clutter barrels, an unlocked gold/jewelry chest. The two chests and the sacks are the only containers that do not respawn on the lower deck.