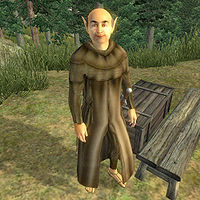 Engorm is a Bosmer alchemist who is a devout worshipper of the Daedric prince Sanguine. He can be found with his fellow worshippers at the Shrine of Sanguine. Speaking to Engorm will allow you to learn about Sanguine's preference in libations.

Engorm spends his entire life wandering around near the shrine, without ever sleeping or eating.

He wields an iron dagger and wears a monk robe with sack cloth sandals. He carries a small amount of gold. Being an alchemist, he has the typical spells of alteration, conjuration, destruction, illusion, mysticism, and restoration.

He has clearly dedicated his life to worship Sanguine, whose sphere is hedonistic revelry, debauchery, and passionate indulgences of darker natures. He is, however, the one who knows how to approach the shrine and will greet you with a question: "Have you come to revel in the glory that is the Shrine of Sanguine?" And he will elaborate if you ask him about the Shrine: "It is a place of celebration for us. We dance, we make love. Would you speak with Sanguine?" Should you choose to decline, he will pity your lack of faith: "Of course you won't. Go on about your dreary existence. The Lord Sanguine has no interest in one such as yourself." If you tell him you want to speak to Sanguine, he will give you the following instructions: "Approach then, and bring Sanguine a gift. Some Cyrodilic Brandy is an appropriate gift for your host."