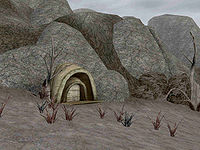 Sandus Ancestral Tomb is a large tomb just outside the eastern Ghostfence, northwest of Falensarano.

The tomb can be found along the path northwest of Falensarano, just outside of the Ghostfence. The enemies here consist of seven undead and a Daedra. The loot is just a few potions, a Native Chuzei Bonemold Helm as well as some other minor equipment, some ingredients, journeyman probe, and a repair hammer. The easternmost chamber contains a dead body.

There is only one known member of the Sandus family: 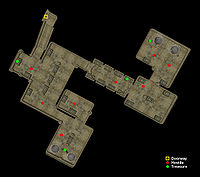