The UESPWiki – Your source for The Elder Scrolls since 1995
< Morrowind: Places: Ships
Jump to: navigation, search 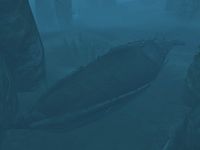 The Obscure Shipwreck is a large sunken vessel in the Sheogorad Region, a short distance northwest from Vas, south-southeast of island with Big Head's Shack, and northeast of Ald Redaynia.

The wreck appears to have once been involved in the Dwemer artifact trade, quite likely illegally as all Dwemer artifacts are claimed by the emperor. The upper hold contains a couple of Dwemer coins and a crate of Dwarven weapons, as well as 15 units of Marshmerrow in a barrel. There are also random extravagant and expensive clothes in two locked crates and a few potions in another barrel.

The lower hold has 100 gold in a sack and 10 Large Kwama Eggs in a crate. There is nothing inside the captain's quarters except a servant's skull.