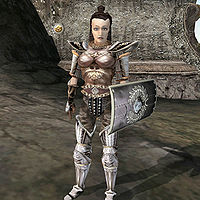 Larienna Macrina is an Imperial crusader who has been hunting a Daedroth named Hrelvesuu. She has finally cornered her in the ruins of Nchurdamz and has contacted the Fighters Guild for help in finishing her once and for all.

Larienna is an accomplished fighter and is also capable of healing you during the related quest. Once Hrelvesuu is dead, Larienna will remain at her final location, and can be approached should you ever need healing again in the area (though her spell for this is weak).

"Ho there! You're one of Hrundi's band, aren't you? I can spot you a mile off. I've been waiting for some time now for assistance, but I suppose you will have to do. I'm on a quest to root out a "great beast" dwelling within these ruins. You and I will explore together."

Throughout the dungeon, she will state the following.

"I can smell the stench of the Daedroth. It is here and I will find it!"
"At last! A means to vanquish Hrelvesuu. The final battle awaits!"
"The beast is near now ... very near. Be on your guard."

When you engage the daedroth:

"Hrelvsuu! [sic] I have come for you! Show yourself!"

After you kill the daedroth:

"Hrelvesuu is vanquished, yet somehow I feel uneasy. I must investigate these ruins further. You have been a worthy companion. Farewell my friend."