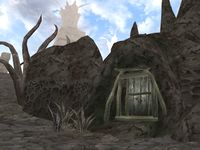 Ibar-Dad is a small cave just to the west of the Assurnabitashpi Daedric shrine, not far from the Urshilaku Camp. 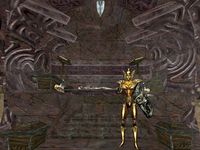 The treasure vault inside the cave

The cave is populated by two hostile sorcerers who, besides being Daedra-worshippers with Scamps to help them out in the fight, are also archaeologists. Behind a door is Elante, the High Elf Sorceress. On a table are a few potions, a Ring of Night-Eye, a key and her notes indicating that this expedition has just discovered a hidden tomb, the Tomb of Mordrin Hanin. The tomb can be found in this cave, accessible through some underwater passages, guarded by some much more powerful Daedra. The door is locked (70) and trapped and the tomb contains a haul of astonishingly good loot.

Just around the corner from the entrance is a Dead Scamp with an iron shortsword in its corpse. If you look closely at some of the glowing purple crystals that dot the entrance tunnel, you'll notice that inside the crystals are skulls impaled by silver daggers (which you can't pick up, even if you use the console to clip through the crystals). Not too far in is the Dark Elf wizard, Badama Andarys.

There are two doors in the chamber where Badama is found. One is unlocked, and serves as the sorceress Elante's study. In her study is a table and a chest. On the table is Ring of Night Eye and a Plain Key on a plate. Her notes are to the left of the plate, and next to that are several books and potions.

The old gate has a level 5 lock on it. Behind it is a Daedric ruin submerged in water. Swimming down and to the left will bring you to a portion of the cave where you can peer down into the room where Badama resides. You can also go through a tunnel where you'll find a trapped chest with a Ancient, rusted Daedric Key in it, and next to the chest is a Potion of Night Eye. This is guarded by a Daedroth. To the right of where you began your swim is a tunnel leading to the treasure vault, guarded by two Dremora Lords. Past the level 70 locked door is the vault containing a Golden Saint and the remains of Mordrin Hanin along with his treasures. The most notable items in the room is the Artifact Eleidon's Ward, which hangs on the back wall of the tomb, above the corpse. Other treasures include a Daedric Face of Inspiration, Daedric shield, staff and battle-axe, and eight (identical) Ancient Silver Daggers with fairly potent poison enchantments - which are all cursed (picking them up will summon a hostile Ancestor Ghost). There are five random scrolls in an urn and two skill-books on stands: 36 Lessons of Vivec, Sermon 16 (Axe) and Mystery of Talara, Part 3 (Destruction).

Badama Andarys knows the following spells: Summon Bonewalker, Weary, Greater Fireball. Badama Andarys wields a steel crossbow and matching steel bolts in combat when she's not using spells. If she runs out of bolts, she will use a chitin shortsword. She wears a blue expensive robe and a blue expensive skirt, along with a common amulet. 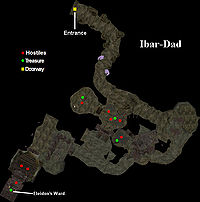