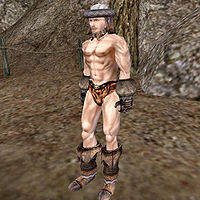 Hisin Deep-Raed is a Nord barbarian who ran afoul of a witch, who retaliated with a curse of Paralysis, after which she stole his clothing and left him in the wilderness outside Ald'ruhn. Unlike his fellows, Botrir and Hlormar Wine-Sot, the witch herself is nowhere to be found, but a little Cure Common Disease potion or spell will do the trick, for which he'll reward you with one of the few pieces of attire he still has on, The Icecap.

Along with The Icecap, Hisin wears Nordic fur gauntlets and matching boots. He carries a Nordic battle axe along with up to 50 gold. Aside from his natural resistance to shock, immunity to frost, ability to shield himself, and a natural frost damage spell, he knows the spells Restore Strength, Veloth's Grace, Troll's Blood, Great Heal Companion, Rest of St. Merris, Resist Magicka, Resist Frost, Resist Common Disease, Resist Cold, Resist Fire, Seryn's Gift, Cure Poison, Balyna's Antidote, Free Action, Woad, Thunder Fist and Hearth Heal. Until he is cured, he is also afflicted by the disease Witchwither, causing him to be constantly paralyzed.