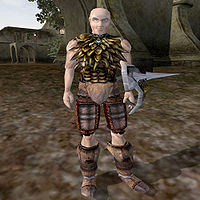 Fjorgeir is a Nord barbarian working as a mercenary for the Fighters Guild (though not actually a member).

If you are a member of House Hlaalu, you can eventually hire him from Flaenia Amiulusus at the Fighters Guild in Balmora to work as a guard for your Stronghold, Rethan Manor, and protect it against bandit attacks (just as a plot point; the game does not actually provide any such attacks). You can choose whether to have him stay and guard your stronghold (if you do not want to risk getting him killed or want to use him later), or have him accompany you to Zainsipilu and fight the bandits. If he survives, you can continue to use him as a follower to fight alongside you.