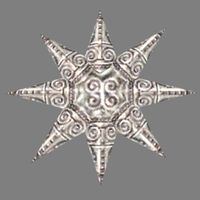 Azura's Star is a boon given to a champion by the goddess Azura.

A reusable soul gem, Azura's Star is filled with a soul and emptied thereof by the usual method. It can be reused an unlimited number of times; however, it still says "You failed to make an enchanted item" and then "Your soul gem broke" when you fail enchanting.

To acquire it, find the Shrine of Azura on the southeast shore of Vvardenfell (its location is shown on the game map). See Azura's Quest for more information.

The gold value of Azura's Star is equal to 5,000 times the point value of the soul. This makes Azura's Star combined with a large soul, the largest value item in the game. Specifically, the largest soul is 1500 points giving a maximum value of 7,500,000 gold.