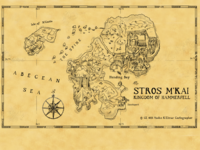 Map of Stros M'Kai showing the location of the mountains

The Ogres Tooth Mountains are a range of mountains on the island of Stros M'Kai in the kingdom of Hammerfell. They are found to the west of Port Hunding and take up roughly a third of the available land area.[1]

The mountains are notable for the Dwemer ruins of Bthzark. Its mines and other facilities delve into the southern half of the range, while the steam and gas harvesting system that powers the mechanisms inside lie above ground in the northern mountains.[2] Two large bridges cross a pass that cuts the range in two, and the steam pipes cross with them.

In 2E 852, the Third Empire had a camp set up in the northern hills, where they were storing many artifacts from the ruins. They also had an airship of Dwemer design, which was stationed at the camp for a while before departing for the palace in Port Hunding.[3]