The UESPWiki – Your source for The Elder Scrolls since 1995
< Lore: People: G
Jump to: navigation, search 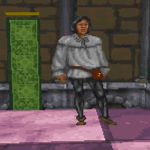 Prince Greklith of Sentinel was the son of King Camaron and Queen Akorithi, and brother of Aubk-i and Lhotun.[1] Greklith became heir to the throne of Sentinel following the disappearance of their eldest sibling, Prince Arthago.[2][3][1] Greklith died of a plague near the end of the Third Era.[3]

Prince Greklith was born in 3E 392, the third child of King Camaron and Queen Akorithi of Sentinel.[1][4] His name was an ancient Redguard word meaning "strong king", and appropriately he is said to have been a very strong, very healthy boy—unlike the Crown Prince, Arthago. However, his sickly sibling vanished under mysterious circumstances in 3E 400, making Greklith the heir to the throne.[5]

However, after King Camaron was killed in battle in 3E 403, Akorithi assumed the regency. Greklith was a regular fixture in the throne room of the Citadel of Sentinel during her reign.[1] Ironically, Greklith fell victim to a plague in the years following the Miracle of Peace, never having taken the throne.[3]