The UESPWiki – Your source for The Elder Scrolls since 1995
< Dawnstar
Jump to: navigation, search

Dawnstar takes place in 36 dungeons, 9 connected dungeons (3 with 3 levels each) in each cardinal direction, connected in the middle by Dawnstar. 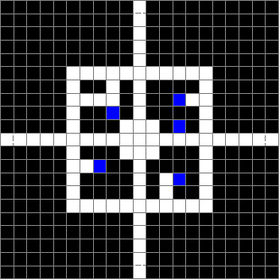 Dawnstar, also known as camp or camp dungeon, is the starting place and central hub of the game. It is the home to all of the Peddlers and the healer Eustacia. It connects to a dungeon in each cardinal direction, which each, in turn, connect to all 36 dungeons in the game.

After you reveal the traitor, the final showdown will take place in the camp, as enemies will rush in from all possible sides, ending with the arrival of the strongest monster in the game, the Gehenoth Thriceborn. During this final battle, the peddlers and Eustacia will still help you.

All dungeons in Dawnstar are quasi-random: although they will remain consistent if starting a new game, they generate differently based on your device. The following is based on the largest version of the game.