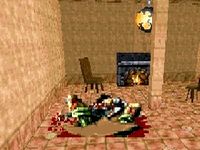 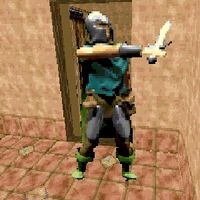 ...and one of his murderers 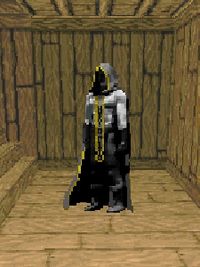 The mind behind the assassination

"How are you, (player's first name)? If you need work, I've got somethin' for you. Standard protection job. Interested?"

"All right. The client's name is (client's name), over at (client's house) just up the street from here. He wants you over there right away. Seemed very agitated, you know the type. He'll give you all the details when you get there."

"Sure, you're lookin' for more high class work these days, right?"

Ask around to locate the building where the client lives; it will be in the same town you received the quest in. Enter the building, and you find the client lying dead on the floor with a note on his corpse. However, there are more pressing matters; you will be attacked by the party of assassins who slew your client, so defend yourself against them. Take care, as these assassins are not above using poison. Hit one, and be told:

"Back off, mate, or we'll do you the same way we did (client's name) over there."

After you kill the attackers, retrieve the note from the client's corpse, which says:

This is what happens
to people who don't
listen to my warnings.
(Assassin's name)

Ask around about the name on the note, and eventually someone will say one of the following:

Travel to this town and ask around until you are given the name of the building the assassin calls home. Enter the building; your quarry will be wearing the garb of a Dark Brotherhood member. Speak to the assassin and be told:

"Yes...? Wait, you're that Fighters Guild musclehead poor old (client's name) thought could protect him, aren't you? Who let this (player's race) in here?!"

The Brotherhood member will then transform into a nightblade and attack you along with several assassins. After you have disposed of your attackers, the trail grows cold. 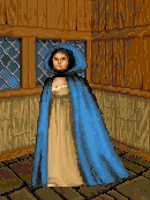 The daughter of the victim 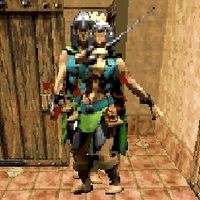 The trap is sprung 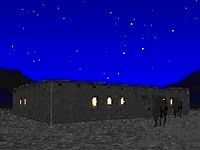 Roughly 10 to 21 days after killing the Dark Brotherhood assassins, a courier approaches:

A dusty courier flags you down. "(Player's name)? Thank (random god), at last. This letter is for you."

Check your inventory to find a letter. It reads:

My name is (daughter's name), daughter
of (client's name). When I heard of your
heroic action in avenging my father's
death, I wanted to thank you myself.
I would be grateful if you could come
see me, if you have time.

Travel to this town and find the building named in the letter. Enter and find the daughter. Talk to her and she runs to your side, shouting:

Four assassins will spring from the shadows to attack you, saying:

"You should spend as much time sharpening your wits as you do sharpening your blade, (player's name). Nothing is simpler than laying an ambush for you Fighters Guild thugs."

Kill the assassins and leave the house with the daughter. As you exit, she says:

"Thank you from rescuing me from those assassins. If you could get me to (safe house) in (safe house's town), I can make my escape from (region) on my own from there."

Escort the daughter to her hideout. When you enter it she will say:

"I don't know how I can thank you for saving my life, as well as avenging my father's death. Please accept this (magical item). It belonged to my father, and I would like you to have it."

If you kill the nightblade you encounter during this quest, you will gain/lose additional reputation according to the table below: