The UESPWiki – Your source for The Elder Scrolls since 1995
< Daggerfall: Quests: Knightly Orders
Jump to: navigation, search 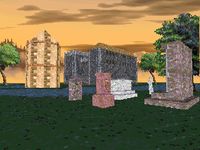 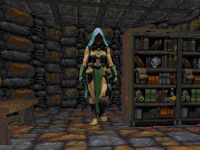 Be quick, for the nightblade is a powerful enemy

Speak to the Quester, who says:

"We have a traitor in (town), a villainous Nightblade who has turned against (his/her) brethren. Our honor is at stake, (player's guild title). Join our righteous fury."

"(Knightly order) has been betrayed by a perfidious Nightblade. Will you help us track the cowardly villain down and destroy (him/her)?"

The Quester goes on:

"Very good. The traitor is a Nightblade named (traitor's name) who has taken refuge in (dungeon) to the (direction). If you have not returned in (time limit) days, your honor will be forfeit and another will take your place. Do not fail us in this, (player's first name)."

"An ignoble reply. I expected better."

Deal With the Double-Dealing Defector[edit]

This is a standard dungeon crawl. Go to the dungeon the Quester mentions to you and find the target, a nightblade. Nightblades are dangerous enemies who can attack from a distance with bows or up close with Destruction magic, so you may wish to bring potions of healing or magic resistance. There may be multiple nightblades within the dungeon, but when you have find and kill the traitor, you receive the following message:

You have slain (traitor's name), the nightblade.

Upon your return, the Quester says:

"Well done. You have reason to be proud."