The Mistress of the Night[edit]

Nocturnal starts whispering to the player:

"You wish, (player's name), for power. With it you can thrash at shadows and have a hope. If I brought you this hope, what would you bring me? Would you destroy one who brings me pain?"

"Would you? You would be my anesthesia? You will go to the lair of the Mage (mage's name) at (dungeon) and slay (him/her)? Ah, (player's first name), for that I would give to you my Skeleton's Key which I have entrusted to my slave (worshipper's name). After (mage's name) lies dead, go to (town) and meet my slave at (building). You will recognize (him/her) easily - a (worshipper's description). There you will receive the Skeleton's Key. And now, I must return to my cold palace of Oblivion. I will await news."

"As I thought, no heart at all. We shall have no contract then, you and I, and, disappointed, return I to my cold palace. The souls within are no kinder than those here, but there, they follow." 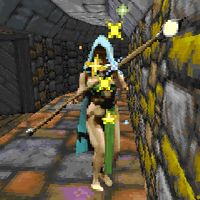 The mage would rather strike a bargain

Travel to the dungeon named by the Daedra Prince and find the mage within. There may be multiple mages inside the dungeon, but you must slay the specified target for the quest to count as a success. When hit for the first time, the mage will offer you a deal:

"Wait! I know that Nocturnal has sent you, and that she has promised you the Skeleton's Key. But if it is truly power you seek, I can top her offer -- if you cease your attack, I will tell you where to find (artifact). Do you agree to my offer?"

The artifact in question will be Auriel's Bow, unless you already have that artifact in your inventory. If you do, the mage instead offers the Warlock's Ring.

"Excellent. I knew you had a mercenary's heart. (Artifact) lies hidden in (artifact dungeon). You have only to find it and you will be a power to be reckoned with indeed. Now, I bid you good day, lest you decide to claim both (artifact) and the Skeleton's Key by killing me. A mercenary heart such as yours should not be trusted too far!"

Accepting the offer means betraying Nocturnal; after about a day she will send her minions after you. In addition you will lose 20 reputation with the Daedra Prince.

Travel to this new dungeon and find the artifact within. It will look like some rusty dungeon equipment, so you may want to use Info Mode (by default, the F3-key) when you come across any such items. It will say "You see a Auriel's Bow" etc., if you have located the artifact. Pick it up and leave the dungeon.

Two to thirty in-game minutes after picking up the artifact, the following message appears:

Mocking laughter echoes in your mind,
"You should have known better than to trust me, (player's name). Perhaps this shadow of power can satisfy your craving for a time, while you rage vainly against those who actually possess it. Me for example. I do hope sweet Nocturnal won't be too displeased with your treachery."
(Artifact) crumbles to dust in your hand.

Thus, this option ends in failure; you receive no reward and are out the cost of summoning Nocturnal.

Kill the mage. When the spellcaster dies, a message appears:

Now that the mage is no more, head to the town where Nocturnal's loyal slave waits for you. Ask around to locate the correct building and enter it. Speak to Nocturnal's worshipper for your reward. 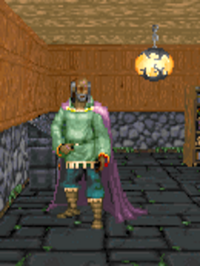 Speak to Nocturnal's worshipper and hear:

"So, you're (player's name), right? I'm (worshipper's name). I must say, I was wondering what kind of (player's race) it took to glide into a Mage's stronghold, murder the owner, and trip right on out. Very impressive. Nocturnal is likewise intrigued by you, hence this gift: Skeleton's Key. Be careful with it, (player's first name)."

If you betrayed Nocturnal by accepting the mage's offer, you will lose 20 reputation with her.

If you ask an NPC about Nocturnal's worshipper, you may hear:

If you ask an NPC about Nocturnal, they may say:

If you ask an NPC about The Skeleton's Key, you may be told: