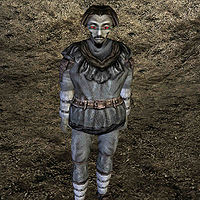 Uryn Maren is a Dunmer commoner hired by Carnius Magius to steal ebony from the Raven Rock mine. He has some contraband in his heavily locked house by the docks. Uryn is later murdered by unknown forces.

He is wearing a common shirt with matching pants and shoes and he is carrying a sample of flin. Aside from his natural resistance to fire and the sanctuary provided by his ancestors, he knows no spells.