The UESPWiki – Your source for The Elder Scrolls since 1995
< Bloodmoon: People / Merchants / Blacksmiths
Jump to: navigation, search 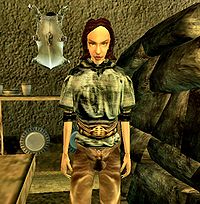 Sabrina Vitellia is an Imperial smith and the proprietor of the local smithy in Raven Rock and has a noticeably large amount of gold to barter with.

Sabrina will only appear if you choose to have a smithy built during the Raven Rock quest Setting up Shop. Otherwise, the trader Sathyn Andrano will appear.