The UESPWiki – Your source for The Elder Scrolls since 1995
< Bloodmoon: Items
Jump to: navigation, search

Quest items are items which are needed to complete a specific quest; usually they have to be given up when the quest has been completed. In appearance they are usually identical to generic items. They are only distinguished from generic items by their name, the fact that they will not stack in your inventory with generic items, or because they have a minor enchantment. These do not include items given as rewards for completing a quest. Quest rewards are generally unique items (armor, clothing, or weapons) or Artifacts, which have unique appearances and significant enchantments. 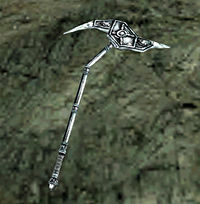