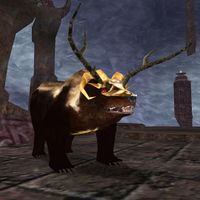 The largest danger with Hircine's Aspect of Strength is its phenomenal strength, giving it a melee attack that will have even high level characters in trouble after a few hits. It pays a price for the strength in its speed, which is only 20, and should ensure most characters should be able to stay out of range and attack from a distance. This, combined with the weakest set of abilities of the three aspects, make the Aspect of Strength, ironically, the weakest of the three.