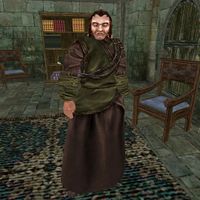 Antonius Nuncius is an Imperial priest who serves at the Imperial Cult Shrine in Fort Frostmoth. He is not happy at having been posted on what he calls this "terrible frozen excuse for an island" and has come up with a plan to get himself reassigned to Vvardenfell.