The UESPWiki – Your source for The Elder Scrolls since 1995
< Blades: Creatures(Redirected from Blades:Wolf)
Jump to: navigation, search

Wolves are a creature group in Blades that are hostile to the player. They are weak to slashing and shock damage, but resist bashing, fire, and frost damage. They all have stagger immunity, which means that they can not block attacks, but instead swarm the player in groups and can only be hit with melee weapons while they are attacking. As they have no stamina or magicka, they can do not have any spells or abilities. Wolves cannot appear as a boss. 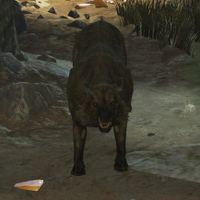