The UESPWiki – Your source for The Elder Scrolls since 1995
< Blades: Quests: Events
Jump to: navigation, search
The vile energies on the other side of the mysterious portal have made giant spiders even more monstrous, and converted all enemies' attacks to poison. I must shore up my poison defenses before venturing in.

You will want to have a lot of poison resistance armor and potions for this event, as the enemies only do poison damage. There are two enemy types you will have to go against, wispmothers and spiders, the wispmothers are weak to fire and so a weapon with fire damage is highly recommended, whereas the spiders are weak to frost damage and so a frost weapon and frost spells are recommended.

When you begin the event, you will start in a cave and after walking for a short while will encounter the first enemy, a wispmother. After dealing with it, move onto the next main area that has some tents in it, which has two wispmothers and a spider awaiting you. The next room has a spider in it and the only secret area of this event, with it being a gate on the right side, the lever is right next to it. In this secret area is a standard spider, and a pair of optional bosses, one spider and one wispmother, these are all guarding a golden chest. 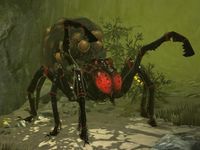