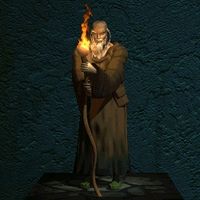 Old Man Chimere, Chimere Graegyn by full name, was a retainer of the ambitious Direnni clan and a master of conjuration. He dared to scheme against Mehrunes Dagon, and won. When his trick succeeded, Dagon was cast into Oblivion. However, in the instant of his betrayal, Dagon struck out against the mortal who tricked him. Chimere's pact assured that he would live forever in his home town among the happy voices of his friends and countrymen. Twisting the literal words of Chimere's pact, Dagon scooped up tiny Caecilly Island (a small island off the coast of Northmoor) and hurled it into the void. All Chimere's friends and countrymen were instantly killed, though the sounds of their voices remained to torment Chimere's memory. Chimere was condemned to live forever, to grow progressively old and crippled with arthritis, and to contemplate the tragic consequences of his defiance of fate and fortune in cheating a Daedra Lord.

He is found in his cottage on the Chimera of Desolation. He left some letters all over the island, inviting you to seek him out. After his initial few requests, he is very helpful in the defeat of Egahirn and your escape to the Havok Wellhead.

"Er.. uh.. (creaking and groaning like he hasn't talked in two hundred years.)"

"Keep ye back! I am a powerful conjuror! I can destroy the most powerful of godlings with but a word! One more step and I will consign thee to Oblivion! "

"I warned ye! With but a gesture I invoke the power of the darkest… urk.. can't move. Dang arfritis [sic]. KEEP YE BACK! Nice creature."

"Errrrr! You howl so strangely. What manner of fell beast are ye? Some demonling from the darkest pits? Some savage animal bristling with claws and fur and fangs? "

"Mayhap ye are a delusion of the mind. A bit of undigested pudding."

"Ye ARE human! I had nearly forgotten… From whence come ye, mortal? From the Northmoor mainland? Your face isn't familiar, and I know everyone on the island."

"What a relief ye be human. Perhaps ye can be of assistance to old man Chimere. I have lost something, and I canna find it. With me arthritis, I canna go looking for what I have lost…"

"I loved that little spoon so… and now I know not what I have done with it."

"Spoon? What are you talking about? What do I want with a spoon?"

"Once I had a little cat. No! Many kits! I had FLOCKS of kittens! Oh! You should see how they skitter! All over the town! Oh, they were my joy. What squeakings they would make! "

"I canna answer such things until me kits are restored to me! "

"Cats? I have no cats. I had some children. Have ye seen me children? Playful scamps. Up to some mischief, no doubt, the imps."

"I had a few children. One? Two? Thousand? I forget. I remember! About two thousand!"

"Ye lie! Sin-hearted blackguard! I should smite ye with but a gesture-- ouch. Me arthritis."

"There's no one? No one at all? My town! My people! All gone! gone! I remember now! Curse me for a fool! I have destroyed them all!"

"I am sorry. I have not been myself. Give me some time. As for your questions, look over there on the table for my journal. The story is there. Take your time. When you've finished, perhaps I'll be in better control."

"Have you reviewed my journal?"

"Read my journal. Please. And don't trouble me again until you have."

"So. The Hunt hasn't yet swallowed you up. A promising sign. Can I help you?"

"Have you any other questions?"

"I banished Dagon by invoking his protonymic."

"His protonymic. Like a mortal wizard's true name. The focus of incantory magics. The short hairs."

"Oh, I'm sure it will do you no good. Since his reemergence from Oblivion, he has surely added a neonymic. To protect himself against me, and anyone else who gets his protonymic."

"No. Lehkelogah. His protonymic was Lehkelogah. But surely that's now only half his incantory name. So you see, it does you no good. Even if you were close enough to him to invoke it in his presence."

"Of course! You'll be wanting my Armour of the Saviour's Hide. When complete, it might even turn aside the menace of the Huntsman's Spear. Ages ago I scattered and hid the pieces around the island to keep them from falling into the wrong hands. I wish I could remember where I left them --"

"No. Sorry. I wasn't quite right in the head when I hid them. Things are very hazy from that time. Here. Wait a moment. I'll jot down everything I can remember. Take my notes, and look around the island. It's a small island, and not that many places for an old man to hide large pieces of armor."

"What an odd question. And interesting. Yes. Certainly. But how would you survive the attacks of the Huntsman Spear? Even if you wear the Armor of the Savior's Hide, it is only REALLY effective against an oathbreaker."

"OF COURSE! My Armour of the Savior's Hide! It protects the wearer from attacks of an oathbreaker! If Egahirn is forsworn, the armor will protect you. Oh, that's too sweet. And better yet -- think of THIS! Who MADE the Spear? Dagon FORGED the Spear for the Hunt. And it is Dagon's own power which makes the Spear's power so utterly terrible! And GUESS WHO IS A BIG FAT OATHBREAKER?! Hah, hah, hah! It's PERFECT!"

"OF COURSE I'm sure. Have I ever failed you before? Hah-hah-hah! It's PERFECT. You wear my armor. You can wield the Spear. YOU CAN KILL THE HUNTSMAN! Hah-hah-hah. I see the hands of the Gods in this! JUSTICE! Divine JUSTICE on Dagon! And you, youth, are clearly the GODS' TOOL! You cannot fail."

"I will help you. All I know or own is yours for the asking. And the one possession I lack in this world is my life, and that is not a gift you can give. Perhaps only Dagon could grant such a gift. I suffer, from age and guilt. But not many mortals have bested Dagon. It's some compensation. I am lonely, yes. Perhaps a companion. Yes. But don't waste thought on it. Concentrate on your plight, and let me aid you. "

"Yes, of course. You have the armor."

"So go get the Spear. It's in a case in the Chapel of the Innocent Quarry -- the green crystal monstrosity south of the waterfall. You can't open the case yourself, of course. Magical wards and seals galore. But bring it back to me, and I'll have it open in a jiffy. Then I'll check the Spear for traps, curses, that sort of thing -- can't be too careful with Daedric sorcery. Then you take the Spear, and you're in business."

"GIVE ME THE CASE. Right. Just as I thought. Just like all Dagon's other little protection schemes -- just a few tweaks -- a pinch -- a deft yank -- and -- ta da! Open. Just like I told you. Okay. Take the Spear. Go ahead. Don't be shy. Everything is fine. I've checked it completely, you're perfectly safe -- THERE! I TOLD YOU! I TOLD YOU! YOU'RE NOT EVEN A LITTLE DEAD. HAH-HAH-HAH! Still have the old touch. Right?! Right!?"

"The Spear? Oh. Yes. You use it. You know. Like. Grab hold and poke. Simple, really. Oh. And don't waste time poking anything but the Huntsman, actually. Cuts right through Huntsmen during a Hunt -- the ritual thing, you know -- but sharp as a butter knife on most Daedra. "

"Go out there, and make me proud of you. I'm sure you'll do just fine. Now. If you don't mind, I think it's time for my nap. A lot of excitement for an old man. But be sure to come back and tell me how everything works out."

"[[The old gentleman snorts in mid-snore and peers out balefully through one sleep-gummed eye.]]"

"Hmmph. Told you, didn't I? You're the Tool of the Gods. You're Justice Incarnate. Now. Go get Dagon for me. Good night."

"Go on. Go get the armor. You're not getting the Spear until I see you in the Armor. No Armor? No Spear. Safety first. First rule of sorcery. Safety first."

"YOU can leave. I can't. The gate is in the Temple of the Daedric Rites, the great horned travesty in Granvellusa, the walled town. You need six keys to get into the Temple, but once inside, the path to the gate is open. I'm afraid I don't know where the keys are, but I've never looked for them, either. Not much point. For me."

"That's rude. The keys must be left where the Hare can find them. That means you must KILL Egahirn to get the sixth key and escape. That's just not fair. Huntsmen take no harm from any mortal weapon."