As before, go to sleep and see Ria Silmane in your dreams. She will say:

"You have done well. I had thought you lost to me. The third piece of the Staff is yours. Rumors have been whispered about in the Empire. I think Tharn senses that the pieces come together. You must take care to not be discovered by him-your death would be most unpleasant. I have divined the location of the fourth piece of the Staff. It lies in the Halls of Colossus, a structure built to honor a race of Giants, though none have been seen in the land for ages. It is said that the Halls of Colossus sat perched on a cliff overlooking the Great Divide, which is along the southern edge of Tamriel. Perhaps the Halls are near that coastline. I only wish I could offer you more. Fare thee well my friend, and find this place, for the sake of our loved ones..."

Asking around about the Halls of Colossus leads you eventually to the Mages Guild in Corinth, Elsweyr. There, the Loremaster of the guild, Turamane ap' Kolthis tells you that they used to have a tablet that would tell them where the Halls of Colossus is, but it was stolen by someone who knew that the tablet was valuable. That someone took the tablet to the Temple of Agamanus. Most unfortunately, the battle over the tablet left the Guild in a weakened state, too weak to go get it back. If you agree to go retrieve the tablet, the location of the Temple of Agamanus is marked on your map.

The temple, located just south of Corinth, is a tri-level dungeon. The levels are not large, but each contains a good amount of treasure. The temple is full of flame-throwing monsters and other assorted ill-wishers. You may want to bring some Potions of Resist Fire, because this place is crawling with hell hounds. Also, it could be a good idea to use the opportunity to collect treasures; all levels have a lot.

On the first level, the way down is in the southwest corner of the dungeon. The dungeon has a normal layout, so just head south and west and you'll get there. There are many small rooms in the very south of the first level which contain easy treasure.

On the second level, you enter in the southwest and go down in the north center. The way is indirect. If you don't have Passwall, you'll initially find yourself threading a little maze. When you emerge, you can then head more or less directly to the way down.

On the third level, you enter in the north center, and the tablet is in the southwest. Passwall can be a big help, as can Levitation. Without Passwall, the way is tortuous, and you will have to do some always-dangerous swimming to get where you want to go. There is a very common glitch where you cannot pass a crossing point in the water near the room with the tablet. This is caused by an enemy being directly on top of the wall which sits on top of the water. If you encounter this bug, you can pass through by using passwall to create a path around. If you are not a spellcaster then simply find a weapon at any town that contains the passwall spell as an enchantment. You can also save and reload while directly under the monster, which might change its position and allow you to pass.

When you get to the room with the tablet, answer the obligatory riddle "sun", grab the tablet (46,38), and make the long trip back out to Corinth.

Back at the Mages Guild, hand in the tablet for your reward: the location of the Halls of Colossus.

The first level of the Halls of Colossus is a very large dungeon that is strewn with keys, and of course monsters. The keys open magically-locked doors on the second level. Obviously, the idea is to hunt for the keys so as to get by all the second-level doors. However, by using passwall on the walls around the locked doors it is possible to completely skip this intended portion of the dungeon and run through the Halls in minutes.

The monsters on the first level are not too difficult, but the ones on the third level can be more challenging. Monsters include ghouls, skeletons, rats, and a few hell hounds. These monsters are on all levels except the third and last one, where there are only skeletons and homonculi (you may want to have a few Potions of Shock Resistance on hand). If you can handle ghouls and zombies, then you should be ready to complete the quest.

The remaining keys are harder to get. If you do not have Passwall, you will have to go down to the second level and take the stairs up to enter a section of the dungeon you couldn't otherwise get to. Take the closest way down (32,52).

The second level is a huge, empty hall (empty except for rats, that is). Assuming you went down the aforementioned door, the magically-locked doors are directly in front of you to the west. If you have the iron and gold keys in hand, you can go unlock them if you wish, although you don't need to yet. More to the point are the other six doors heading up: three on the north, three on the south. The eastmost and northeast doors lead to the first section of the first level, the one you're in when you first enter. The other doors lead to widely-spaced ways up behind the wall that separates the first section off. The quickest way to the next key is to go through the door in the southeast (37,68).

The sapphire key is on some stairs just north-northwest of where you came up (42,51). You can from there quickly travel southeast and pick up one of two amethyst keys on a raised area at (22,74). There's another one, though, so you can skip this one if you wish. Either way, there's a flooded area in the extreme southeast that you should explore; there's an inscription you would do well to read (7,76). From there it's a long swim along the south wall to get to the raised area on which sits the ruby key (69,83).

The two remaining keys are in the far north section, a very long way away from the south section of the dungeon. You can either make your way there while remaining on the first level, or you can go down to the second level and come up in a closer location. Going down is recommended because it is more direct. If you do go down, pick either the north central or northwest door to re-emerge on the first level. If you don't want to go back down, make your way back to where the sapphire key was and swim west under the walls.

The diamond key is on the floor in an area by a very large pit (72,9). First unlock a gate north of the pit, then open a door on the west wall and enter a room that is outlined in gray on the map; the key is in the corner of the room. The other amethyst key is on a raised platform a tiny bit southwest of it as the crow flies, but you can't get there directly without Passwall. If you haven't already gotten it, make your way around by heading west, then south and back north (79,16).

You have one key left: use it to open the first door (94,57). The next door presents you with a riddle. If you explored the first level thoroughly and remember what you saw in the southeast flooded area, you will be able to answer it (the answer is the name of the architect, Theodorus). If you have Passwall, you can avoid the door and the riddle altogether. Either way, make your way to the main door. Inside is a puzzle. Solve it using the sum of the index of letters in the alphabet for the age of each name (for example, Igon is 9+7+15+14=45). (The answer to the riddle is 108) to enter the room containing the Staff piece (70,51). If you want to get out of there as quick as possible, run straight forward (east) and a little south to pick up the staff.

When you arrive back in town with the piece of the staff, Jagar Tharn sends a minion and a vision:
"It is obvious, whoever you are, that you are a cunning and worthy foe. It seems that Ria chose well, even if it was her last act. I will not insult your intelligence with further digression. My minions soon approach, but I will not consign you to the dark door of Death. You have proven your worth. Once you are killed, I will raise you to fight for me, as one servants [sic]. Give in to me now and I offer you everlasting life..." 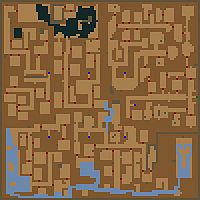 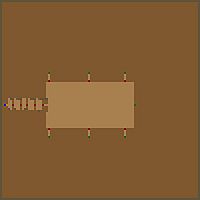 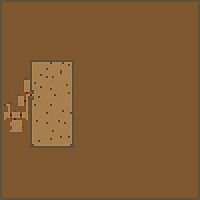 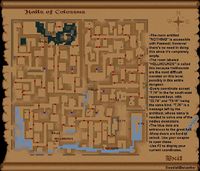