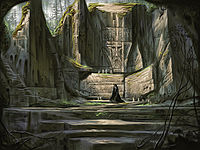 Quests are sorted by where they are assigned or by which faction assigns them. Skyrim also offers hundreds of smaller quests, all of which are listed under Miscellaneous Quests.

Other Quests and Official Add-Ons[edit]

Achievements related to completing quests are:

Some categories of quests can be distinguished by the decorative knotwork displayed alongside the quests' titles in the Journal.