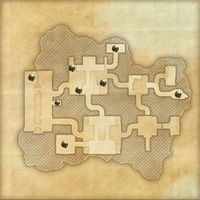 Speaker Terenus has a task for you. He needs you to kill someone. That "someone" will be one of the following individuals:

Speaker Terenus will likely have given you several tasks to complete while you're in the sewers. Your first objective is to either kill a secondary mark or destroy an item— this item may be a Dwarven Relic or a Custom-Made Hookah, depending on the group inhabiting the area. The secondary target is there as a challenge, and the item to destroy is either too powerful to exist or has great sentimental value to someone. The Dwarven Relic will be located on the right-hand side at the bottom of the stairs in the mid-northern chamber of the Sewer Tenement (on the map provided, this is the large chamber with three possible target locations in it), next to Geon Alinie if he's present; the Hookah, instead, is located in the square-shaped, southern chamber (the only large chamber with no targets), in the bottom right corner.

Your secondary objective will be to either:

Finally, you'll want to escape the Sewer Tenement in under two minutes after the kill, as Terenus doesn't want people poking around the scene of an assassination. Stepping into the entrance area counts as escaping the sewer tenement. If you manage to stay within the zone after your main mark has been killed, the Overseer will appear two minutes after the assassination, failing this tertiary objective.

You do not have to actually leave the area for the game to count you as having "escaped". As long as you make it to the ladder room, you're good, as the quest will update. Climb the ladder when you're ready to leave and speak with Terenus for your reward.

Notes
* Any text displayed in angle brackets (e.g., <Alias=LocationHold>) is dynamically set by the game and will be filled in with the appropriate word(s) when seen in game.
Retrieved from "https://en.uesp.net/w/index.php?title=Online:Sacrament:_Sewer_Tenement&oldid=2747010"
Categories:
Hidden categories: