To a devout Redguard, almost nothing is more repugnant than necromancy - which is why what happened in the place called Bahraha's Gloom was so long buried. 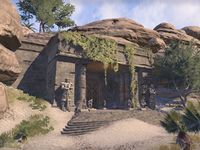 Bahraha's Gloom is a delve west of Abah's Landing that's been overrun by the undead. It is a defiled Yokudan temple, filled with Bleak Veil necromancers, undead Salt Catcher pirates, Mournful Aegises, and Necrotic Hoarvors.

The boss battle involves killing a Mournful Aegis named the First in order to awaken Magnifico Bahraha, a lich. The delve also has an optional boss, a flesh atronach named the Covetous Damned.

Although visible in the first room, the skyshard can only be reached by means of a hidden passage just off the final chamber. A book can be found on a table in the central chamber. 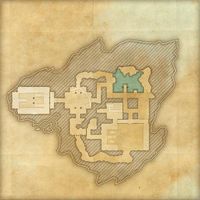 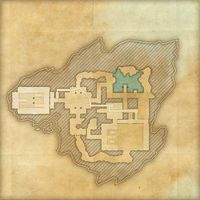 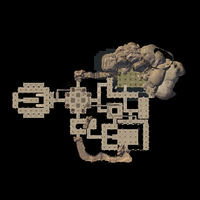 Bahraha's Gloom developer map when it had an earlier name