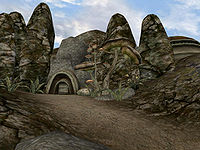 Odirniran is a Velothi tower that resembles a tomb located on Azura's Coast, west of the Shrine of Azura on the same peninsula. According to local rumors Hlaalu and Telvanni have been fighting for this place for years.

Inside Odirniran you'll find a number of House Hlaalu members, and a single Telvanni wizard. There's quite a selection of loot, as well as eight leveled undead and a daedra (Dremora or Daedroth) located within the structure. A Telvanni quest takes you here to rid the wizard that lives here of the Hlaalu attempting to take over the tower. The Hlaalu counterpart quest requires you to kill the necromancer in the tower, rescue the younger Othril sister, and lead her back to the group leader. 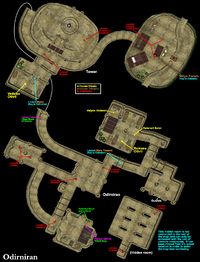