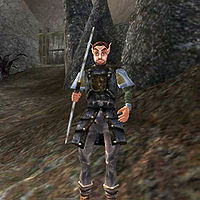 Alveleg, a Wood Elf scout, is a Toad for the Thieves Guild. Alveleg can be found near the Caldera Mine, standing guard outside Ashanammu, a small cave being used as a hideout by some House Telvanni agents responsible for thefts and disappearances at the ebony mine.

He is a minor trainer in Marksman, Sneak, and Block.

He is wearing an Imperial chain cuirass along with a dragonscale tower shield and a common shirt with matching pants and a pair of extravagant shoes. He is carrying an iron longsword, a long bow with 60 iron arrows, a standard potion of fire shield, and two bargain restore health potions. Aside from his natural resistance to disease and his ability to command animals, he knows no spells.

"No. I haven't seen any Telvanni agents around here. Although, now that you mention it...." Goodbye.

If you are a member of the Thieves Guild:

"Pity you had to get mixed up in this, %PCRank %PCName. But we can't just let you walk away. Nothing personal, you understand. Just business." Goodbye.