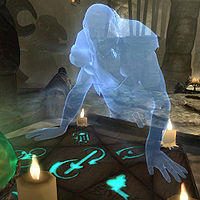 Holgeir was a Nord warlord. He fell in love with the huntress Fjori on the field of battle, where they fought until her sword broke his axe and his shield dulled her blade. With Fjori and Holgeir united, there came a time of peace for the clans of the forest. When Holgeir was bitten by a poisonous snake, Fjori journeyed to obtain a cure from the Akavir which instantly cured him. However, then Fjori too was bitten by a snake, and she died immediately due to exhaustion from her journey. Holgeir had a great tomb built, and after its completion, he took his own life, hoping to rejoin her in Sovngarde.

He wears noble clothes with a pair of fur-lined boots and carries an iron dagger.

This Skyrim-related article is a stub. You can help by expanding it.
Retrieved from "https://en.uesp.net/w/index.php?title=Skyrim:Holgeir&oldid=2118187"
Categories:
Hidden categories: