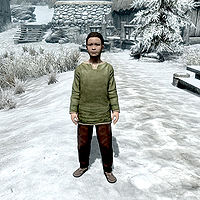 Alesan is a Redguard child who lives in Dawnstar. He makes money by bringing food to the miners of Quicksilver Mine and Iron-Breaker Mine.

He sleeps on a bedroll at the Windpeak Inn every night between 9pm and 8am. He wakes up to go straight to work, running through the town and delivering food from the inn workers, Karita and Thoring, to the local miners: Gjak, Karl, Lond, and Borgny. At 6pm, he switches to feeding the chickens outside the inn, and can be seen carrying a handled basket.

He wears a set of child's clothes and shoes and carries two loaves of bread and a goat cheese wedge, along with an assortment of random food and toys.

You can ask him what he's running for or where his parents are. If you ask why he's in a hurry, he'll answer, "I'm running food and supplies to the miners. Don't pay much, but they let me sleep by the fire in the inn most nights." If you inquire about his parents, he'll sadly inform you, "They're... dead. My pa was a sailor. Took me with him on his last trip. After he got sick, they... put us off here and left without us. He... died a few days later. I've tried to make do since then, but... it's been hard. Real hard." You will then have a dialogue option to adopt him. You can only go through with the adoption if you have a house with a child's bed and container.