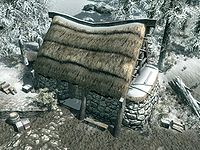 Aeri's House is one of only two homes in the small settlement of Anga's Mill, located next to Anga's Mill Common House and across from the wood mill.

It is the home of mill owner Aeri who lives there alone. It consists of only one area, Aeri's House. 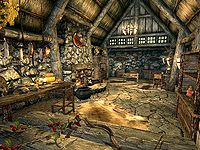 Aeri's house is a small, one-room building with a fireplace in the middle of one wall, a mudcrab mounted above it. In front of the fire are a cooking pot, a large kettle, a cast iron pot, and a small stack of extra firewood with a woodcutter's axe on top. To the right of the fire is a non-respawning cupboard with some cookware and crockery in it, as well as two portions of dried frost mirriam and three portions of dried elves ear hanging above it. Aeri's bed is on this side of the room, next to which is a non-respawning end table with one bottle each of alto wine and normal wine on it. On top of a short non-respawning dresser is a steel mace. The non-respawning chest contains some gold, and may hold animal parts or miscellaneous items, with a tiny chance of having a torch. On a table with two chairs is a loaf of bread, along with two more bottles of the same wines.

The other side of the room holds two tables, a non-respawning cupboard, and three respawning food barrels. The first table has four tankards, a barrel of mead, one bottle each of wine and alto wine, two potatoes, two and a half loaves of bread, one serving each of baked potatoes and grilled leeks, a salmon steak, seared slaughterfish, and a few cheese wheels and wedges. Above this table are a number of hanging animals, which consist of four pheasants, four rabbits, and two salmon. There are two bottles of alto wine and one bottle of wine on top of the food barrels, with one portion each of dried frost mirriam and dried elves ear and two garlic braids hanging above them. The second table has five snowberry branches on it, along with a hunting bow, two iron arrows, another tankard, and another bottle of alto wine. The final piece of furniture in the room, the cupboard, holds on its shelves a potion of true shot, a potion of minor healing, four blue mountain flowers, and four more iron arrows.