The UESPWiki – Your source for The Elder Scrolls since 1995
< Shivering Isles: NPCs
Jump to: navigation, search 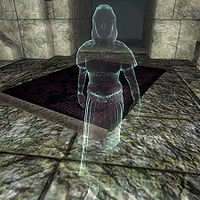 One of the wandering citizens 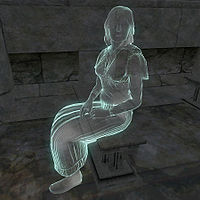 One of the worshipping citizens

The Vitharn Ghost Citizens are ethereal beings that once populated the city of Vitharn. When Fanatics attacked the settlement many years ago, the citizens' arrogance or piety prevented them from helping Vitharn's army. Once the soldiers were defeated, the citizens were all slaughtered by the attackers. Along with all of Vitharn's other inhabitants, Sheogorath cursed them to relive their final moments for all eternity. The citizens will all be found in Vitharn Keep: two in the chapel and two wandering around the Keep. Once you complete the quest Ghosts of Vitharn, they will be released from their curse and disappear.

All citizens are part of the Vitharn Citizen faction and none have spells apart from an effect which gives them their ghostly look. Two citizens will be found sitting and praying in the chapel, while constantly listening to Anglor preach. When you approach them, they will cry out, "I'm praying for the gods to protect me from the Fanatics." If you talk to them they will say, "I used my piety to avoid joining the defense. Thus I earned my doom." The other two will be found randomly wandering around the whole Keep. When you approach them, they will remark: "Let the soldiers fight the Fanatics. I have better things to do.", "I'm not some commoner to take up a sword. Let the rabble risk their lives, not me.", or "It is the role of lesser men to fight for those of noble blood." Should you talk to them they will greet you by saying, "I went about my business while others fought. Thus I earned my doom."

All citizens are elegantly dressed with a red velvet blouse and garment, a silver ring, a copper amulet, and a pair of white mage's shoes. They also carry an apple, although they never eat.