The UESPWiki – Your source for The Elder Scrolls since 1995
< Shivering Isles: Places: Homes
Jump to: navigation, search 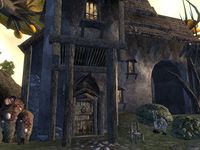 Being the largest house in town, Horkvir has found a way to fill it: On top of the cupboard near the entrance two samples of black tar have been placed and next to it, two weak poisons of burden, a strong poison of illness and a strong poison of clumsiness have been placed on a small shelf, also on top of it three bottles of Bernice's Summer Wine can be found. On a small table three samples of water root pod pit, one sample of smoked baliwog leg, one sample of withering moon and a bottle of mead have been placed. On a second, bigger table, Horkvir has placed three more samples of smoked baliwog leg along with two samples of rot scale and a strong potion of detect life. On another shelf, a potion of chameleon, a poison of affliction and a poison of confusion stand out among all the clutter, and the chest next to it may contain a few pieces of low-level armor and weapons. Also, in the first room upstairs, two patchwork pants, a black finery outfit and three repair hammers can be found lying on the floor. The jewelry box on top of the drawers has a chance of contain a single piece of unenchanted jewelry. In the second room of his house, a patchwork shirt, two pairs of scruffy shoes, another pair of patchwork pants and two lockpicks are scattered around.