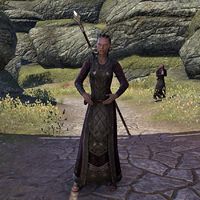 Sister Safia is a Redguard member of the Spirit Wardens found at the Pariah Abbey. Before the attack, she was to be married with Count Hosni at-Tura, a noble of the Wayrest court and the leader of the Midnight Union.

"I don't understand how this could be happening ... we have no feud with the Midnight Union!
Why would they suddenly come here and destroy the Abbey? It doesn't make any sense."

If you started the quest with Brother Alphonse, you can say:

A monk told me you need help.

Otherwise, you can ask:

Is there anything I can do to help?
"Certainly! The bandits set everything on fire! The whole place is going up in smoke, and they're preventing us from putting the fires out!
"We weren't prepared to fight. If you'll help extinguish the flames, it would be a tremendous favor."
How do I put the fires out?
"Take this bucket! If you can get to the well and fill it... I don't know any other way.
The larger fire may not be so easy—just focus on the smaller fires first."
I'll put out whatever fires I can.

After starting the Fire in the Fields quest:

"I appreciate your assistance, but I would not want you to think of the Spirit Wardens as helpless.
We are a capable lot, but to be attacked out if nowhere like , and by the Midnight Union...we were just caught off guard."
Who are the Midnight Union?
"Smugglers, mostly, and gamblers—even petty thieves. But they've never been ruffians before now. They almost killed Brother Roland!
I thought I knew them. Why attack the Abbey? Why?"

When the smaller fires have been extinguished:

"I can see that many of the smaller fires have been extinguished. Thank you for volunteering to help us."
Yes, I put out many of the small fires.
"Thanks for pitching in. I think we've saved enough of crops to make it through the winter.
But why did this happen? What's it all about?"

"I hesitate to ask you for further assistance, but if you're willing, your help would certainly be appreciated.

Our leader, Abbot Durak, left some time ago and hasn't returned. I fear he may be injured...or worse.
Where did he go?
"Abbot Durak and a few others went to the Cave of Dreams on the north ridge. Durak wanted to get something to help put out the fires.

Brother Hakam went after them with a Scroll of Returnm to help them get back sooner. Now I worry about Hakam, too."
Do you want me to look for Hakam or Durak?
Both, but look for Brother Hakam first.

With the scroll of return, you can get Abbot Durak back here sooner, where I hope he'll be able to put out that big fire."
I'll find them both and get as soon as possible

After starting to search for Hakam and Abbot Durak:

"Brother Hakam and I were novices together. How will I get on without him?

Of course, returning Abbot Durak here is of even greater importance. I'm sorry to burden you with our troubles, but we're in dire need."

When the large fire has been put out:

"You put out the fire! Maybe this situation is about to start turning around."

A memory of Hosni breaking his engagement off from Safia can be found within Hosni's dream:

Sister Safia can be found at Wayrest Castle after saving King Emeric from the Galthis, alongside her fellow Spirit Wardens.

"You know, I was thinking. If Vaermina's Omens were really driving people mad, does that mean they weren't responsible for their decisions?
Never mind—don't answer that."