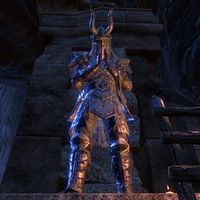 Statue of Ra Abah on top of his tomb

Ra Abah is the skeleton of an ancient Yokudan warrior. When walking by his tomb, Sai will comment "Ra Abah was a warrior of great renown. He fought alongide Frandar Hunding in the seven great battles against the Armies of Hira, and survived. At the final battle at Hattu Mountain, more than three hundred thousand gave their lives."

He is one of several Yokudan heroes raised from the dead by Mannimarco during the quest Valley of Blades, and Kasura will yell out "Sai, look out! He's raising Ra Abah!" when he is resurrected.

This Online-related article is a stub. You can help by expanding it.
Retrieved from "https://en.uesp.net/w/index.php?title=Online:Ra_Abah&oldid=2017366"
Categories:
Hidden categories: